Last week, I took all of my three kids (ages 7 and under) to see Free Birds as part of an advance screening. The kids were entertained throughout the movie and the 3D version was a treat because it captivated the interest of the little ones. The introduction into the first Thanksgiving also makes for a great conversation starter later on down the line. Although some of the humor is above the kids’ heads, it’s a great addition for the parents who will appreciate that kind of detail. I should also note that there is quite a bit of violence, just in case you have children who are put off by such things. This film is most definitely made with kids in mind. And in my case, it worked perfectly because by the end of the movie, each of my kids had a favorite character and now we have a movie that we can reference during Thanksgiving season. 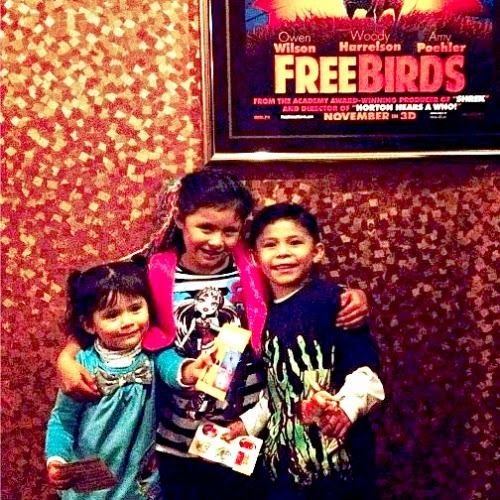 About Free Birds
Free Birds reminded me of “Rio”, where the outcast bird meets a female bird, and along with their sidekicks try to save the day. The movie starts off with Reggie, voice of Owen Wilson, Mr. Turkey-Know-It-All and the outcast of his flock. He lives in a free-range barn, where his flock is being fattened up for Thanksgiving Day. He doesn’t understand the turkey way of life and doesn’t care to understand the importance of a flock. Then a string of luck lands him at Camp Davis to live in turkey paradise. There, we are introduced to Jake, voiced by Woody Harrelson, the brawny and activist turkey, who kidnaps Reggie. They decide to go on a mission to save their fellow turkey brethren from being the main entrée for Thanksgiving dinner. In order to complete their mission, they hijack S.T.E.VE. a time machine voiced by George Takei, to travel back in time to the first Thanksgiving. It’s a great plot with lots of twist and turns and very clever writing. So this November, take your little poults and gobble this movie up! 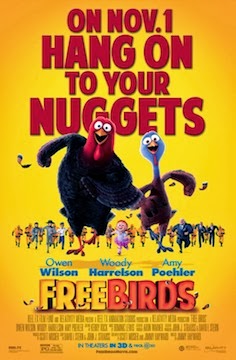 This is not a sponsored post. I received complimentary admission into Free Birds to screen the movie as a member of the press. All thoughts and opinions remain my own.