Our recent trip to Oceanside ended with a visit to Mission San Luis Rey, the “King of the Missions.” The hubster and I thought it would be a great opportunity to introduce some California history to the chiclets, simultaneously talking to them about the Catholic faith and their Mexican roots. It was a short visit (about a couple of hours), but the topics we covered were heavy and it left a big impression on them. 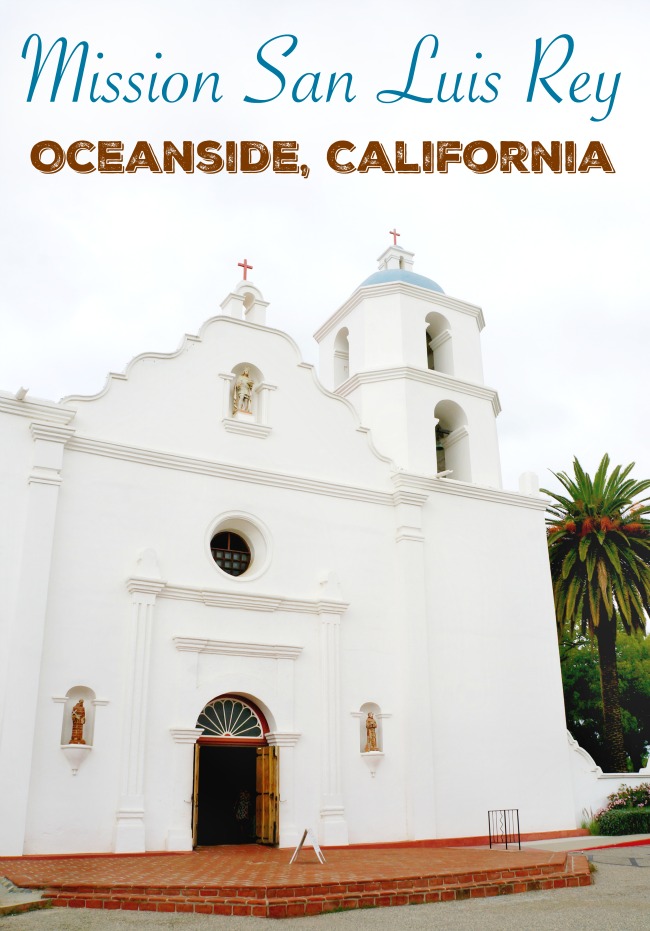 Mission San Luis Rey is located at 4050 Mission Avenue, Oceanside, CA 92057. The easiest way to get there is by taking the 5 and then the 76, heading inland. The mission is on the 76, and you won’t miss it. They have a lot of land, and even though they were under contraction when we visited, the sign they had up was clearly visible.

Parking is free, and there’s plenty of it too. Visitors can walk the grounds and enter the cemetery without an admission fee. There is a minimal fee ($5 and under) to enter the museum. And yes, the museum is a definite must. 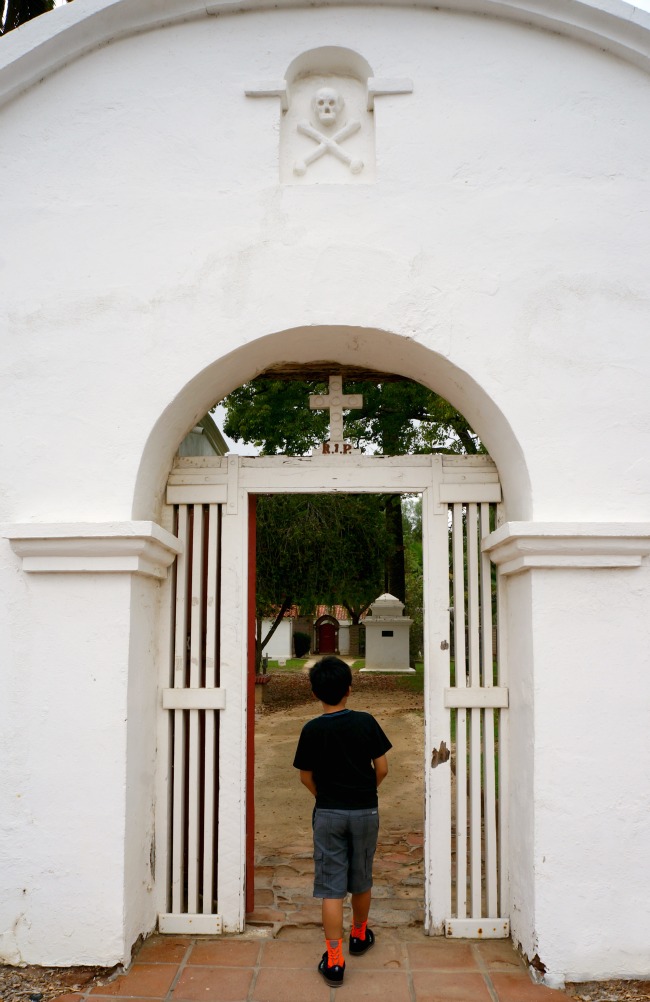 The cemetery has been in use since the Mission was founded in 1798. In fact, it’s the oldest burial ground in North San Diego County that is still in operation. Here you’ll find the Franciscan Crypts where the remains of many of the Friars who lived and served the mission are housed, as well as the Indian Memorial erected in 1830 (it’s the one with the big cross), and the cemetery entrance also features the skull and crossbones commonly found at Franciscan cemeteries. 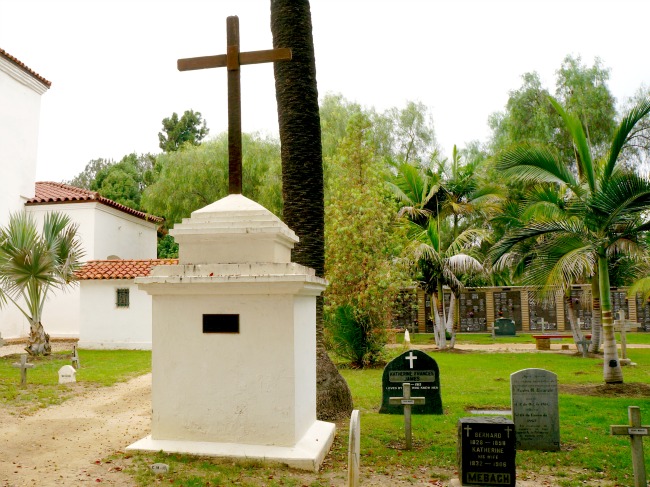 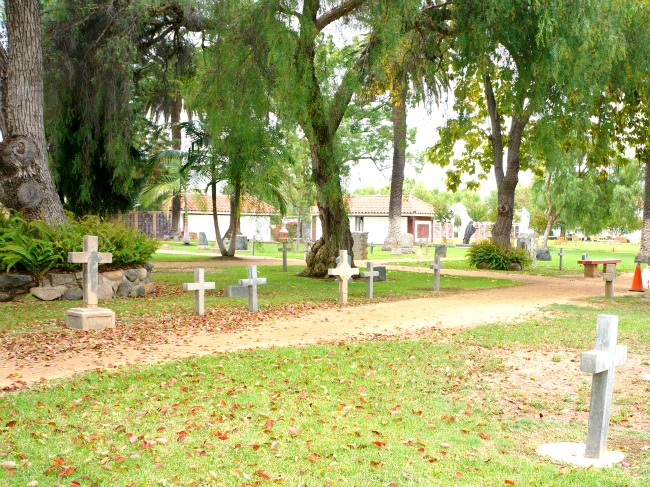 A door to the left of the cemetery will lead you into the Mission church. The church is always open and also gives mass. Click here for the mass schedule.

There are 21 California missions, and the church at Mission San Luis Rey is recognized as the most beautiful and unique in all of the missions. It’s also the largest one and the only one that is adorned with a wooden dome and cupola. Inside, you’ll walk into a church that has side altars (not seen at other mission churches) and the Madonna Chapel which was once used as the mortuary chapel.

Visitors can purchase a candle for a $4 donation to light and place inside the chapel. We purchased one in the names of my dad and Hubster’s abuelita. 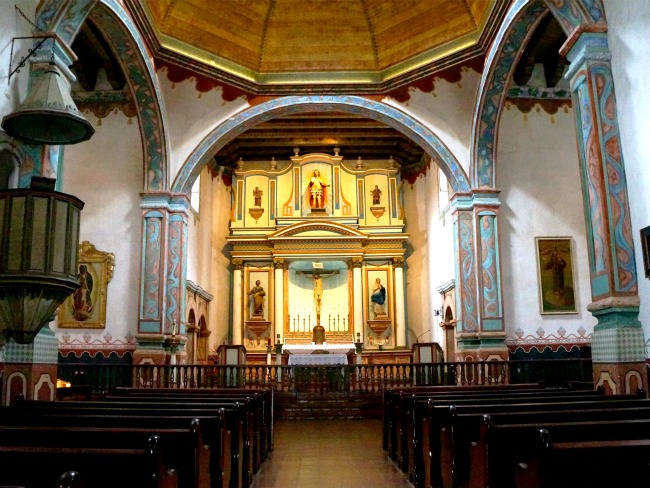 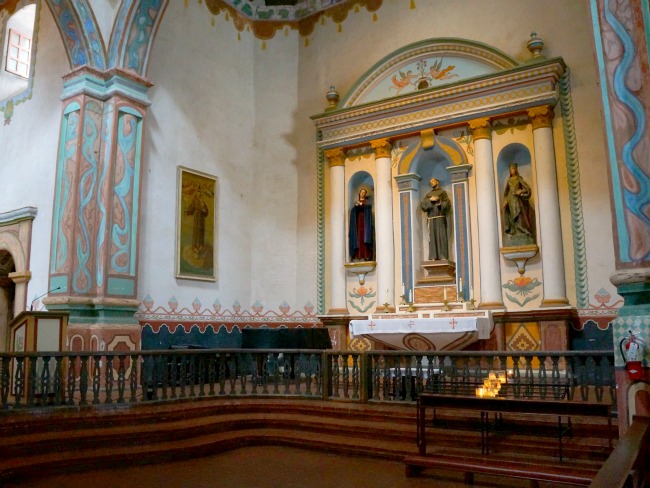 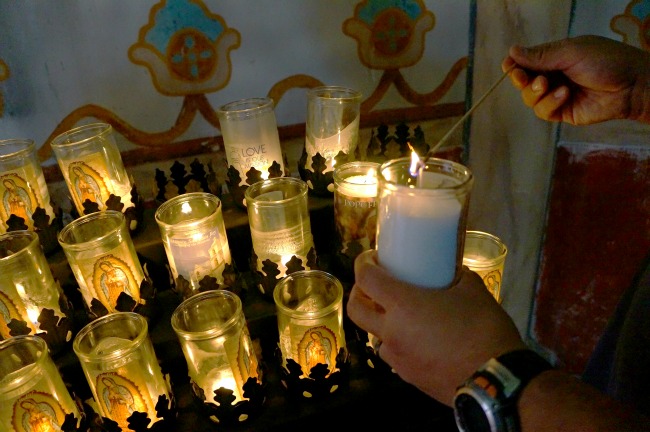 The church alone was a great experience for the kids because up until then, they had only been to modern churches. It brought the catholic faith alive with the beautiful designs, statues and paintings running across the walls. After a quick prayer and lighting the candle, we made our way into the museum.

We absolutely loved this museum. We found out that only 12 of the original arches remain of what was once the convento where the friars once lived. 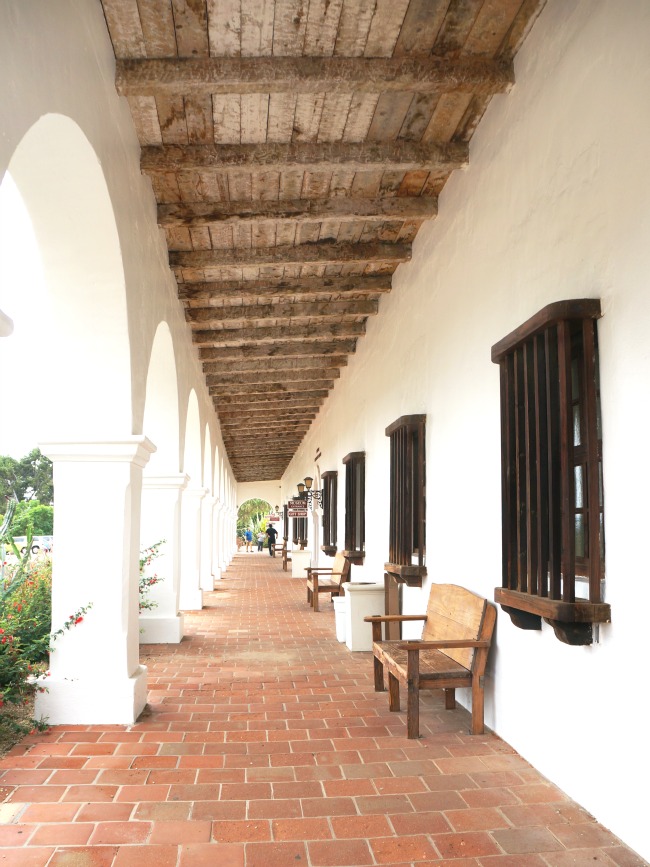 Each room is split up into sections covering the history of the mission, catholic artifacts and life as it once was living there. The kitchen, which was originally a part of the convento, was left as it was, giving me the perfect opportunity to show the kids what my nana’s kitchen looked like when I visited her in Mexico. 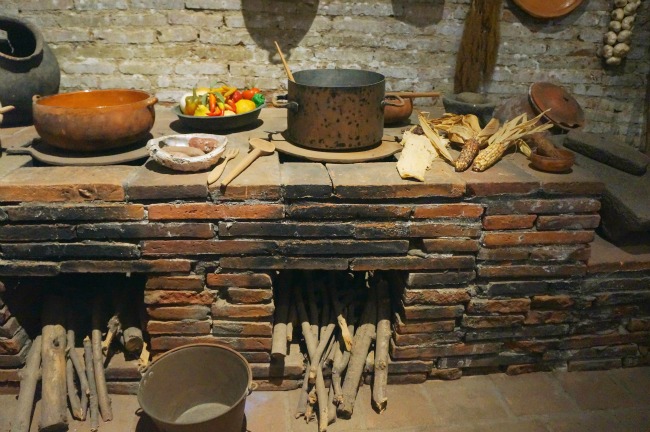 As a history lover, I was truly in awe to the point of tears. There’s just something about seeing the President’s signature that really gets to me. 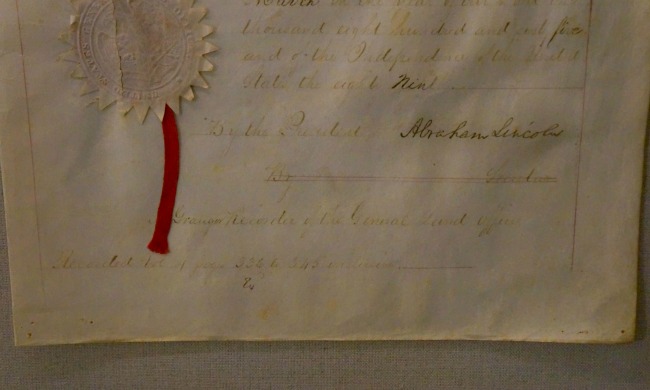 The self-led tour leads you briefly out to see the courtyards (which was hosting an event for the Friar’s that day) and then back in to the museum. 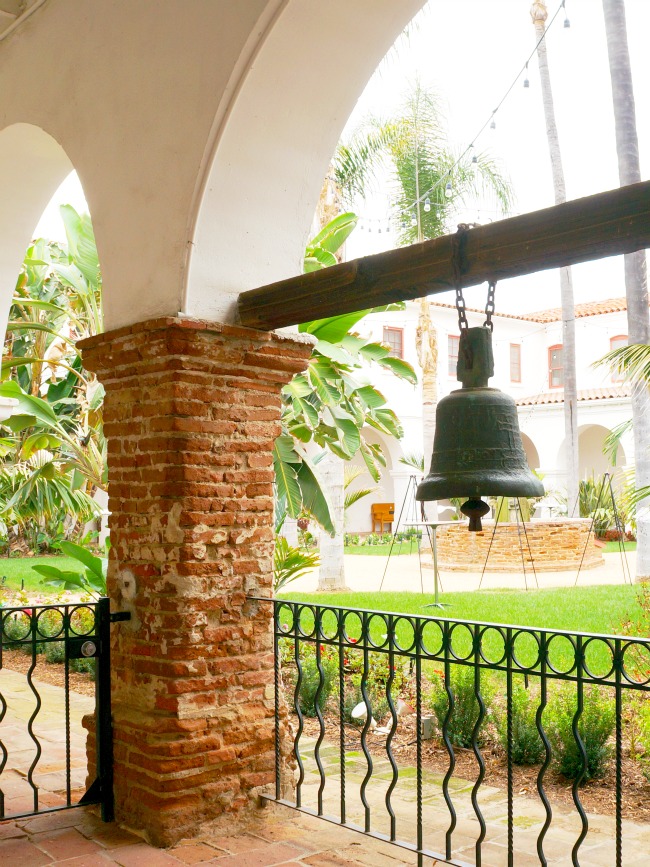 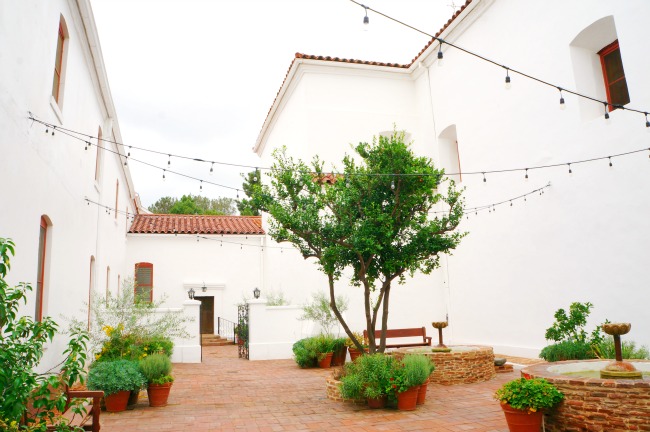 Once inside the museum, visitors can see various Catholic Church artifacts, including robes used for mass, statues and artifacts. Everything was so beautiful and well taken care of. 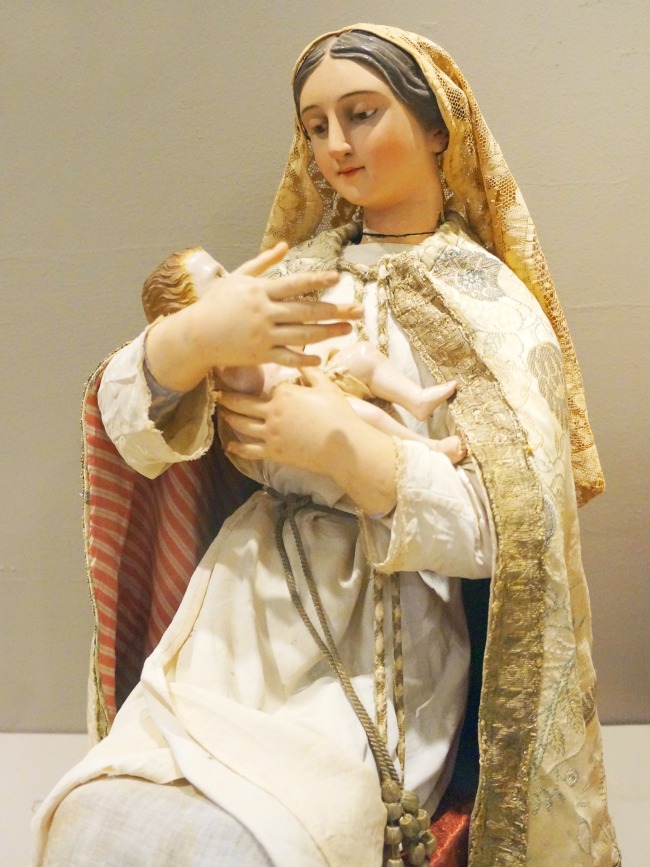 Finally, because one cannot really see what the mission looks like (parts of it is cut off from the public), a model of the Mission sits in a case for all to see. 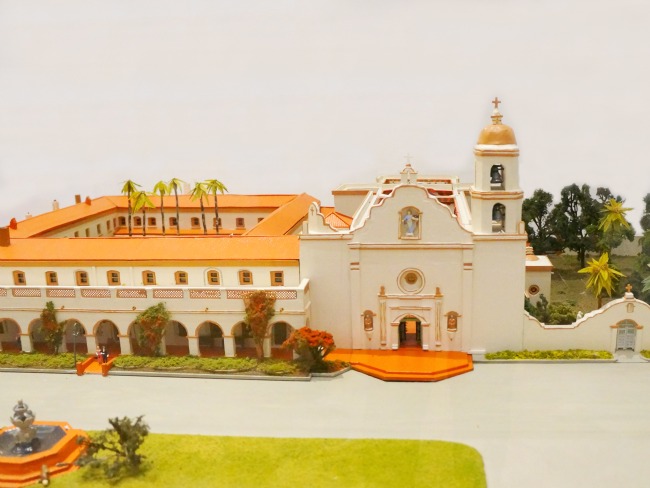 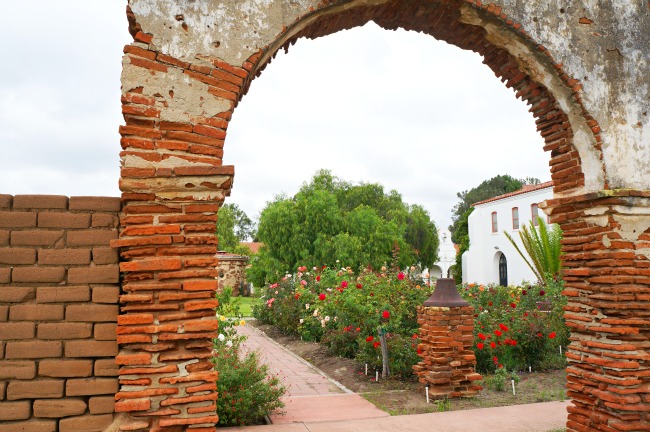 This out-of-the-way mission was a highlight of our staycation, and on the way home we had fun pointing out all the El Camino Real bells that connect all the missions from Baja California to San Francisco. 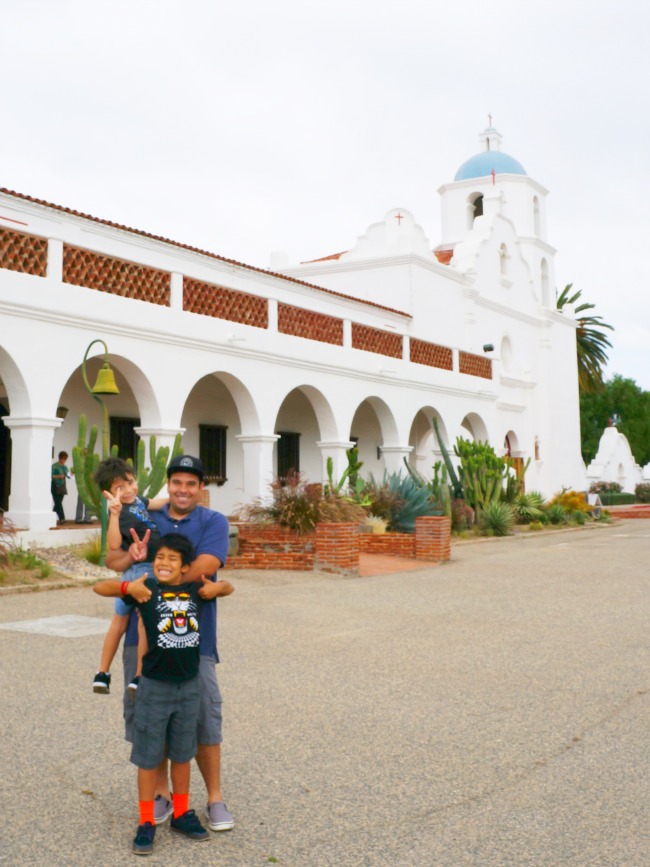 We can’t wait to visit more missions with the kids and see more of our history. Also, fun fact, several television episodes of “Zorro” were filmed at the mission’s cemetery.

A guide to celebrating the holidays at So Cal Theme Parks
5 things you can’t miss on the Graceland Tour in Memphis, Tennessee