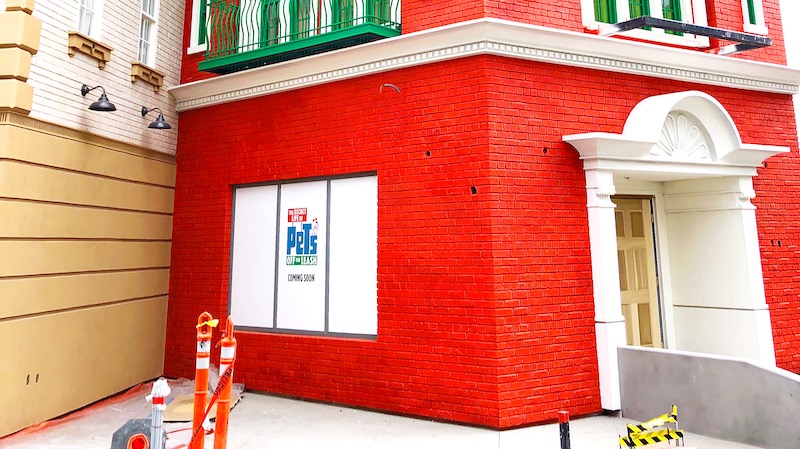 This marks the first time the ensemble cast perform the voices of their iconic characters for a theme park attraction. The film’s talent and their alter egos include Patton Oswalt as Max, Kevin Hart as Snowball, Eric Stonestreet as Duke, Jenny Slate as Gidget, Tiffany Haddish as Daisy, Lake Bell as Chloe, Dana Carvey as Pops, Steve Coogan as Ozone, Chris Renaud as Norman, Hannibal Buress as Buddy, Bobby Moynihan as Mel, Jessica DiCicco as Princess and Tara Strong as Pickles.

Adoption day is the ultimate rite of passage for every domesticated animal and the inspiration for this all-new immersive experience as guests assume the roles of stray puppies on the ultimate quest to find their forever homes.

The innovative ride will blend live, dimensional and animated characters with hyper-realistic media and projection mapping to fully immerse guests in a bustling New York City landscape.  Seated within ride vehicles that resemble cardboard boxes—reminiscent of where Katie first finds her beloved Max as a puppy—guests will travel along a track towards the Pet Adoption event and the ultimate happy ending: forever homes.

The state-of-the-art ride will employ a series of technological firsts that combine sophisticated facial recognition with enhanced gesture tracking, which helps to identify each guest as a unique stray puppy for the duration of the ride.  Every time guests experience “The Secret Life of Pets: Off the Leash!” they will likely see themselves characterized as a different stray puppy, creating a uniquely new experience with each ride.

Where to find it at Universal Studios Hollywood

“The Secret Life of Pets:  Off the Leash!” will be located on Pets Place, previously referred to as Baker Street, and adjacent to the popular “Despicable Me Minion Mayhem” and “Super Silly Fun Land” attractions. With the installation of all-new store front facades, Pets Place will capture the charm of a busy NY street, including an iconic NYC subway station.

Save on Universal Studios Hollywood tickets

And if you’re wondering whether to splurge on the Universal Studios Express Pass, read THIS.

With so much to see and do at Universal Studios Hollywood, an Annual Pass invites guests to experience the theme park’s thrill and adventure over and over again. Visit www.UniversalStudiosHollywood.com for more details and to save up to $60 on an Annual Pass when purchased online. Offer valid through March 2, 2020. Restrictions apply.

In preparation for the ride’s opening, Universal Studios Hollywood it is seeking energetic actors and puppeteers to impersonate the voice of Snowball. To learn more and book an audition by appointment only, please visit www.USHAuditions.com.