Yo Gabba Gabba! LIVE!: Get the Sillies Out! will have two performances at the San Diego Civic Theatre.

There are some things that I look forward to re-doing with my second kid and experiencing again. One of those is the Yo Gabba Gabba concert. You heard that right – I WANT to go to a kids’ concert. Yo Gabba Gabba continues to be a favorite at home. How much? Well, my son’s first word was “Gabba.”

The new Yo Gabba Gabba! LIVE!: Get the Sillies Out! tour focuses on one of my favorite songs – “Get the Sillies Out.” The sillies are crazy little creatures that live inside of us and need to be shaken out! You can expect DJ Lance Rock, Plex, Muno, Foofa, Tootie and Brobee to get everyone jumping, shaking and shimming out the sillies.

This show will feature fan favorites from the past two tours and combine them with some all-new music and other surprises. And Biz Markie? Yes, he’s back too. 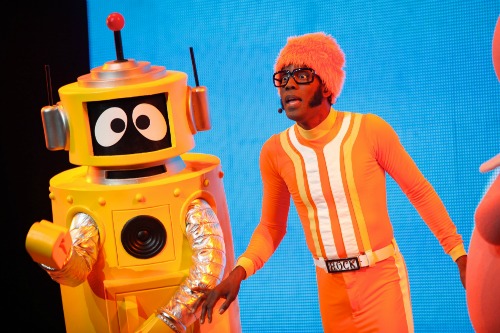 Yo Gabba Gabba! LIVE!: Get the Sillies Out! at San Diego Civic Theatre

When: Saturday, March 9, 2013
Time: 2:30 p.m. and 5:30 p.m.
Where: San Diego Civic Theatre, San Diego
Ticket Information: CLICK HERE for ticket information for the shows. Tickets start at $22. VIP Party packages are available as well which include a ticket in the first 15 Rows, a pass to “Get the Sillies Out” in the private VIP room featuring a super fun party with the Gabba Gang (costumed characters) and more. Children under 1 year old do not require a paid ticket to sit on a parent’s lap.

Yo Gabba Gabba! LIVE! is touring in support of their first national beverage launch, a new line of toys, a new line of kids sportswear and a DVD/ CD collectors’ edition.

For a complete list of tour dates, cities and show times, and a preview of the show, visit www.yogabbagabbalive.com.

This is not a sponsored post. I received press tickets to enjoy the show. All thoughts and opinions remain my own.