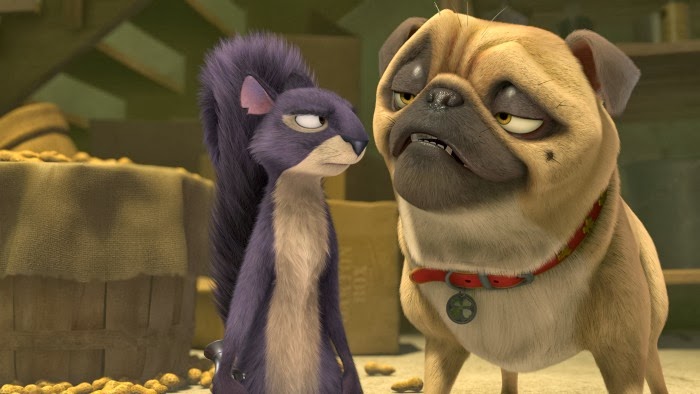 This weekend the family and I watched The Nut Job, a family film out in theaters this Friday, January 17th. Afterwards, we had the opportunity to chat with Will Arnett and Katherine Heigl on this funny film and find out what it was like for them to work on the movie together.

The Nut Job itself was a very funny movie. There is a strong parallel that happens between the animals and the humans, and it seems that the film takes place in a different time which gives it a different feel than your typical kid’s movie. Perhaps some time in the 1950’s (because of the clothing they wore). It’s a story of teamwork, living life on your own and doing the right thing, even when no one is looking. My six year old would burst out laughing during some of their kooky jokes and physical humor. The hubster and I found ourselves repeating lines from the movie! It’s a great film for all ages, though I would probably suggest it more for kids five and over, only because the story line may be hard to follow for anyone younger than that. With two stories happening at the same time, there is definitely enough action to keep you and the kids interested. Moreover, Will Arnett, Katherine Heigl, Maya Rudolph and the rest of the cast do an amazing job at lending their voices to these characters.

SYNOPSIS: In animated 3D, THE NUT JOB is an action-packed comedy in fictional Oakton that follows the travails of Surly (voiced by Will Arnett), a mischievous squirrel, and his rat friend Buddy, who plan a nut store heist of outrageous proportions and unwittingly find themselves embroiled in a much more complicated and hilarious adventure. 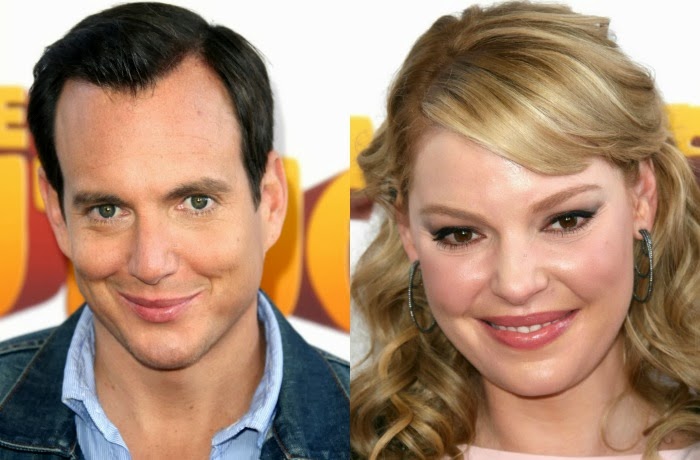 Will Arnett and Katherine Heigl discuss what’s it like voicing characters, work/life balance, and who they would choose if they were hatching a plan like in The Nut Job.

Have you done the voices for your kids?

WA: Yes, sort of. I mean, they’ve heard me talk. They especially know the word “no.” I say that a lot. I should say it like Surly though. They’re really excited for it though. When they see any of the commercials on TV they’re like, “THE NUT JOB!!!!”Or we drive by the bus signs and they’re up against the [car] glass.

Katherine, this is your first animated movie. What drew you to the role?

KH: I just really wanted to be a part of something that I could share with my kids. And we’re BIG animated movie watchers. I think we pretty much queue something up every night to watch with the kids. I thought it would be fun if I was actually in [the movie].

Is there one of the characters that you really can relate to in The Nut Job?

What do you think about work/life balance? Is there such a thing when you’re a parent who works? Is it even harder when you’re a working parent in the spotlight? Was the work schedule something that made your parenting schedule easier?

WA: I think anybody who is a parent knows that it is a balance and you’re always trying to figure out a way to… I try to reverse engineer it. To look at what my family demands are and what my kids need and try to work backwards from there and retrofit everything into it. I feel very blessed to work on something like this, where it doesn’t take [me] away from the kids. Anything that takes me away from my kids I dislike.

KH: We moved to Utah. We’ve been home for the last two years and I finally got a job that took me three weeks in Cleveland. And it was very strange because I’ve never not brought my family with me. But this was a small movie and they didn’t have a budget for that. And it was just three weeks and I thought, “I can do three weeks away. It’s okay. I can handle it.” And I almost find Facetiming harder. It makes you long to just touch them. And you can’t ’cause you can see them… and I get this weird thing about the baby. I just want to hold the baby! So it was a little difficult. The first week was actually kind of okay. (laughter)

WA: One of my legitimate concerns is – when one of the kids comes and gets into bed with you during the night I always think, “I’m gonna have a black eye and I have to go to work and be on camera and they’re going to be like, “hey man – you have a black eye and you gotta work today. What are you doing?”” (laughter)

What tagline does your character says in the film that we can expect our children to repeat over and over, and over.

KH: I don’t think Andy had any of those tag liney lines except for “no, Surly, no!”

Will Arnett, do you prefer voiced animation film over live acting?

WA: I think that most people would say that they prefer not to have to see my face. (laughter) No, it’s true guys. Quiet, it’s true. I’m an idiot I get it. (laughter) But, they’re different. They each have their pros and cons, of course, and doing something like this is fun because you can kind of create the world. You  can kind of do anything. You can go off and be crazy and um, it’s just a different experience. It’s a different discipline.

Do you show up in your pajamas when you do voice work?

WA: You mean, because you can?

Katherine, did you get dressed up to go into the studio?

KH: I did! I mean, I don’t know why. I guess I thought it was the 50’s. I wanted to be like (flips hair) one of those actresses that goes into the studio.

WA: Would you get dressed up to go do it?

KH:  Then I would finally take my shoes off and they would have to adjust the mic six inches. They would ask, “why are you wearing heels?” I don’t know why. I’m strange. 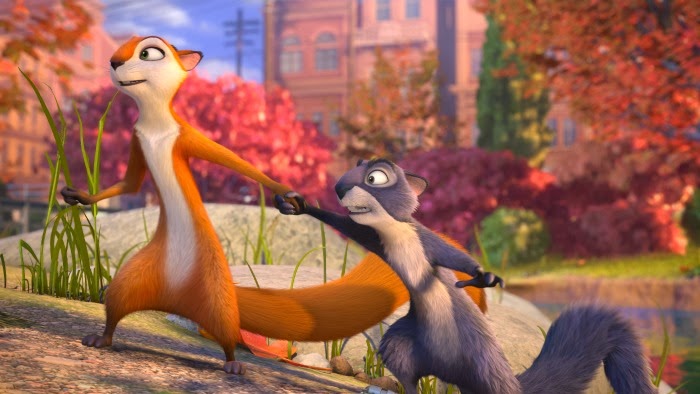 How do you prepare for the voiceover role, versus a movie or TV show?

KH: I have no idea. That was the problem, really. I’m like, “I don’t know what I’m doing here”

Was it scary the first time for you?

KH: It was a little intimidating and I was very self-conscious which is the absolute the worst thing that you can be as an actor. Like you cannot be self-conscious. But it was really akward and strange and then you start getting into it and you’re alone, in this room, with a microphone and they’re behind there (points finger) a glass window watching you and you’re jumping around and doing all this weird stuff and now I watch the b-roll and it’s just humiliating. It’s humiliating! I hope no one ever sees that. (laughter)

WA: Yeah, it’s a weird process. (laughter) I’m saying, you have to do what they call exertion which is like falling or whatever. Like, “okay,” they’re on the other side of the booth and they’re like, “okay, now you’re getting hit in the face by a 2×4 and then you fall three stories and… go!” You’re like, “what, oh. How would I sound like if…. oomph, aaaaah!” (laughter)

KH: I was really just like not in my element.  I had to really work at it.

In the movie, Surly calls on his pal Buddy to help hatch his plan. Who would you call if you needed help hatching a plan. Who is your go-to buddy?

KH: Someone who could really McGyve the situation. Some McGyver-type of guy.
WA: Did you say McGyve?
KH: McGyve. I’m gonna McGyve this.
WA: I like that expression.
KH: My husband says it all the time.
WA: Really? That’s great. McGyve the situation. McGyve this sitch. (laughter) I don’t have time to finish any words. (laughter)  I would say, I wish I could get Navy Seals. They would be great to have. Wouldn’t that be handy to have a Navy Seal? I would be like, “Do me a favor? Snap that guys neck real quick.” And then be like, “where do you want to go for lunch?” I have a friend, Jeremy, who is a good buddy of mine that I grew up with in Canada and he still lives there. And many years he’s a Huntington fishing guy and I used to always say, if the apocalypse is happening, you want Jeremy with you because he’s like, “okay, go!” He’s like a big dude and kill a bear in the woods. I mean, I’m not advocating. But if you had to. I’m not advocating killing bears.
KH: I know this is going to sound really cheesy, but I would call my husband. He can just figure things out. I don’t know why. It blows my mind because if you look at him, you wouldn’t think so. He’s very clever.

Did having kids impact your decision to take this role and how you play your character?

WA: Yeah, it did for me. I mean, to go off what Katherine said, for me, I also watch a lot of these animated films and family programming and i’m a huge fan of a lot of it. there’s a lot of good stuff out there. it’s important at this stage in my life to do things that they can watch and that’s much more important. I mean, I had no reason to do it before I had kids and now, it’s kind of what I want to do.
KH: Yeah, to go off of what I said earlier. I just wanted to do something that I could show my kids and watch together. We watch movies together every night. Hopefully we won’t have to watch this one over and over again because that sort of psychologically plays on me.

What kind of freedom does voicing a character give you as opposed to a live action movie?

KH: I don’t know. I mean, you’re kind of on your own when you’re doing it whereas in live action you’re working with someone else and what they do. This is so isolated in a way and you think about what may be happening. It’s just described in a script. 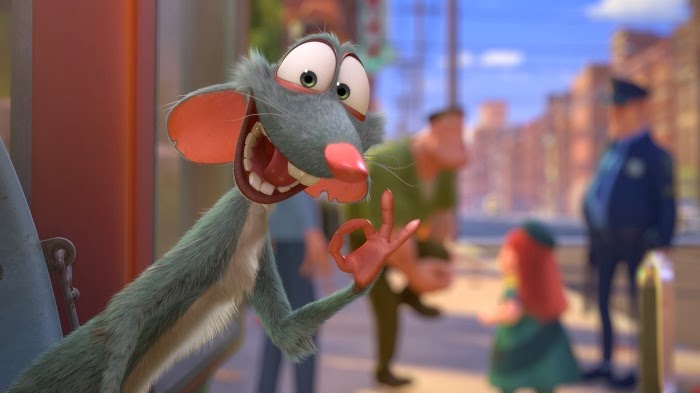