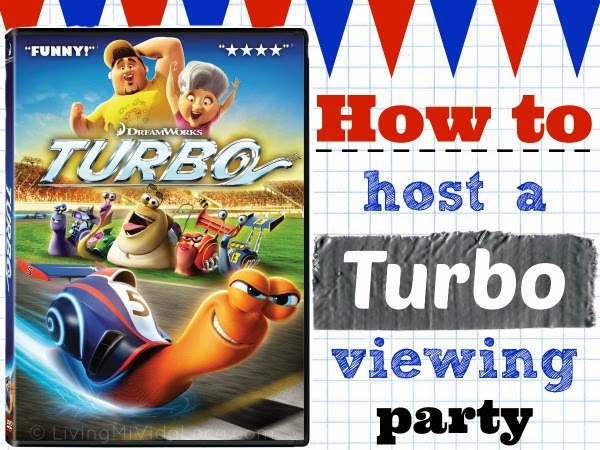 If you have big fans of Turbo at home, or just want to make the viewing a little bit more special, I have compiled a list of fun ideas to go along with this movie. My kids and I watched it over the weekend (my first time seeing it) and it was a lot of fun. I really enjoyed the message it sent about following your dreams because it’s something that I’m continuously trying to instill in my kids. Turbo doesn’t let anyone tell him he can’t reach his dreams, and it’s fun to see him work towards such an enormous goal. It’s a great movie to add to your children’s movie collection. You might even be able to purchase the Blu-ray combo pack with a limited-edition Turbo racer! Available while supplies last.

So you purchased Turbo and you want to have a fun viewing party. Well, why not start with some fun Turbo invitations? Print them out on heavy card stock to make them extra durable. I would also add these official Turbo driver’s licenses and have the kids bring them when they come to the fiesta. It’ll be fun to compare pictures. 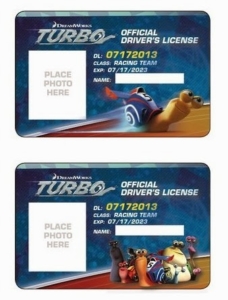 Once they arrive, hand them their own Turbo name badges and have some activity sheets set up for them while they wait for their delicious foods. I found some easy Turbo-themed activity sheets that you can print out and use at home. Click the links for a full-size image.

Have kids race each other to finish the mazes in Turbo Maze – Race a Friend. 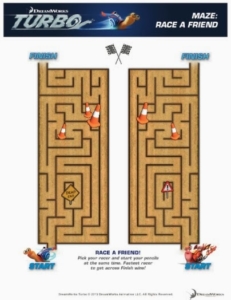 For the older children, perhaps a Turbo word search? 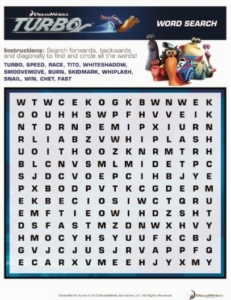 For the younger kids, I have uploaded a bunch of connect-the-dots activity pages that they can use to color. Choose from four different Turbo characters: Burn, Skidmark, Smoove Move and the always popular, Turbo.

Once they’re done with activity sheets, it’s time for some fun on the iPads. For this, you can use the recently released “Turbo Movie Storybook Deluxe” on iTunes. This app lets you read the story of Turbo, give Turbo a custom shell paint job, and it has other features too. It’ll let everyone get hyped up for the movie before it begins. 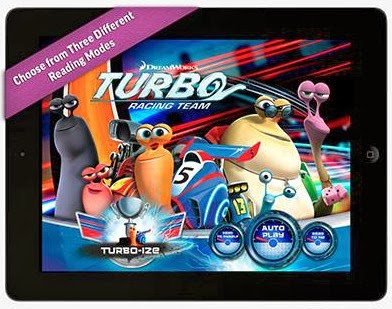 Before the movie begins, your guests can move into the food area where they can be greeted with Turbo plates, napkins, cups… everything! Pick up some snacks like a cinnamon roll snail, make-your-own taco station, snail snack, grape tomatoes and something tasty to drink (maybe something Mexican-inspired like horchata). All these snacks can lead up to the grand finale – cupcakes with Turbo cupcake toppers. 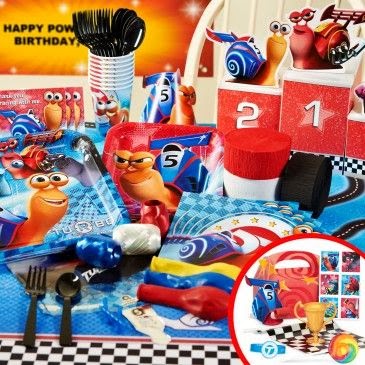 Finally, don’t forget to send your guests Turbo thank you cards. Although, I’m sure you’ll be receiving some from your guests too for hosting such a fun Turbo viewing party!

From the makers of Madagascar and Kung Fu Panda, TURBO is a high-velocity 3D comedy about an underdog snail whose dreams kick into overdrive when he miraculously attains the power of super-speed. But after making fast friends with a crew of streetwise, tricked-out es-car-goes, Turbo learns that no one succeeds on their own. So he puts his heart and shell on the line to help his pals achieve their dreams, before Tubo-charging his own impossible dream: winning the Indy 500.

This is not a sponsored post. I received a copy of Turbo to facilitate this post. All thoughts and ideas remain my own.