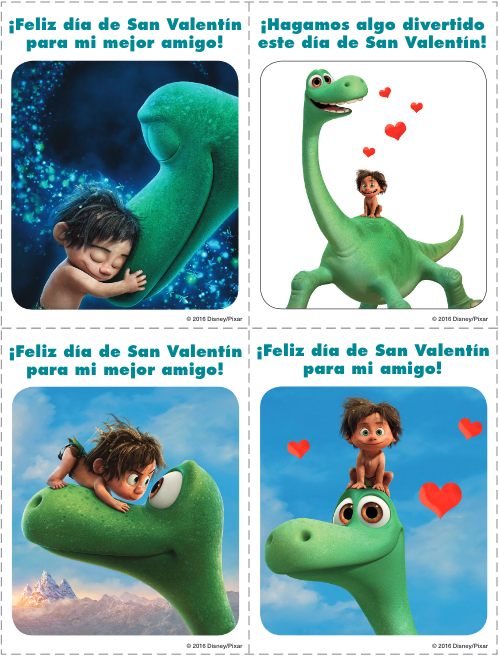 The Good Dinosaur is stampeding it’s way into stores on Blu-ray Combo Pack, Digital HD and Disney Movies Anywhere beginning February 23rd. For now, we have these cute Valentine’s Day cards in Spanish that you can print out and have your kids give out to their family and friends this Valentine’s Day. They’re really cute and say things tike, “Happy Valentine’s Day for my best friend.” and “Let’s do something fun this Valentine’s Day.”

and just in case you haven’t watched The Good Dinosaur, here’s what it’s all about:

About The Good Dinosaur

From the innovative minds of Disney•Pixar comes a hilariously heartwarming adventure about the power of confronting and overcoming your fears and discovering who you are meant to be.

The Good Dinosaur asks the question: What if the asteroid that forever changed life on Earth missed the planet completely, and giant dinosaurs never became extinct? In this epic journey into the world of dinosaurs, an apatosaurus named Arlo makes an unlikely human friend. While traveling through a harsh and mysterious landscape, Arlo learns the power of confronting his fears and discovers what he is truly capable of.

Celebrate Las Posadas with your family, wherever they are
Choosing a tax professional: what you need to know