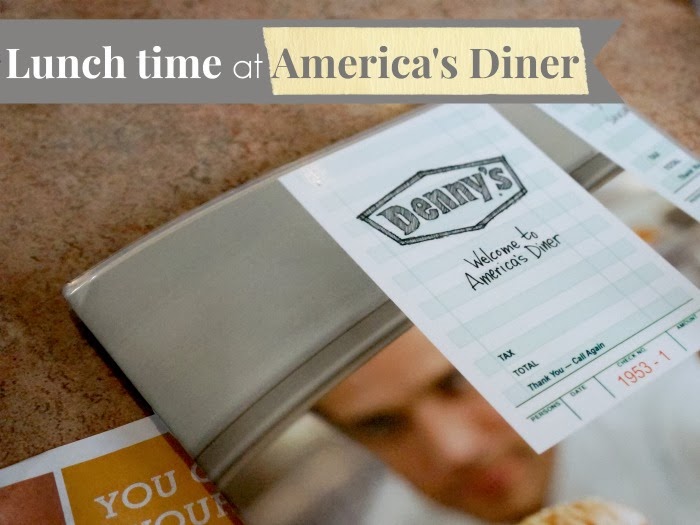 It’s been over a year since I’ve been to Denny’s, and it has nothing to do with proximity. It just wasn’t on my radar for a place to have a bite at. However, last week we stopped by after the Harlem Globetrotters show y me encanto! I liked it! Denny’s has really stepped up to its “America’s Diner” title and is delivering good food with plenty of options.

Our Denny’s comes equipped with a TV. This part I’m not fond of, but if you take a second to overlook that, it feels just like your favorite diner. The staff is friendly, there are plenty of food options and ketchup is kept at the table. We were seated quickly after entering the restaurant and took a booth in the back. 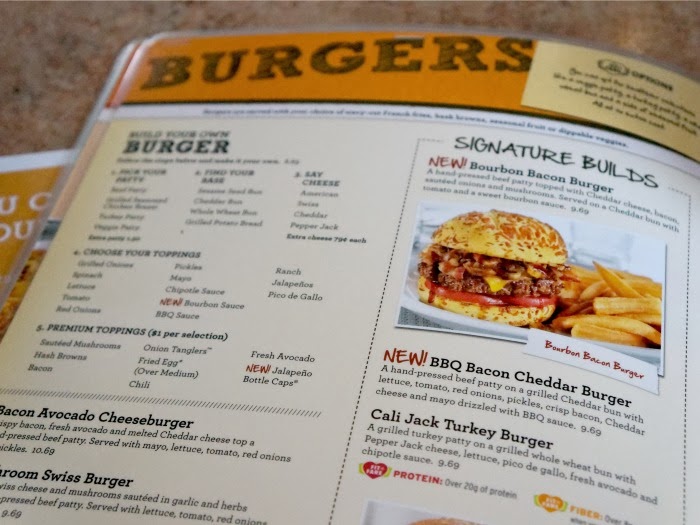 We were a party of five – a six year old, two teenagers and two adults. None of whom had consumed anything in hours so we were all starving. Hubster started us off by ordering waters all around and then ordering an appetizer that we could all share using Denny’s “build your own plate” option. We went for the chips and queso, jalapeño bottle caps and mozzarella sticks. I managed to grab half a mozzarella stick before they disappeared and it left me wishing that they would have given us more than just four to the plate. They were very, very good. The jalapeño bottle caps were basically deep fried jalapeños – ¡delicioso! The chips and queso fell short of my expectations, so I probably wouldn’t order that one again. 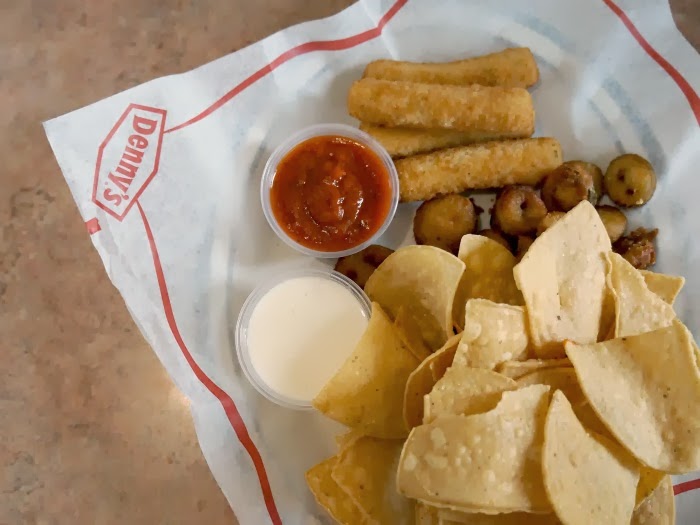 I knew walking into Denny’s that I would be having a veggie burger for lunch. I didn’t know they had a new menu, but I did know that I wasn’t going to eat a salad. So that basically left me with a veggie burger. I can’t say I actually flipped through the rest of the menu to check out the other options though. I went straight for the Burgers section.

Denny’s appears to be playing in the big-leagues now when it comes to burgers. Their meat burgers are all hand-pressed and the toppings they offer do not fall short of the competition. In my true Latina fashion, I went with the spiciest selection – the Cali Jack Turkey Burger. I substituted the turkey meat for a veggie patty (free of charge) and switched out the fries for some fruit. I was immensely proud of myself for doing that, and although my burger would have tasted delicious with some fries – I’m glad I made that one small change. 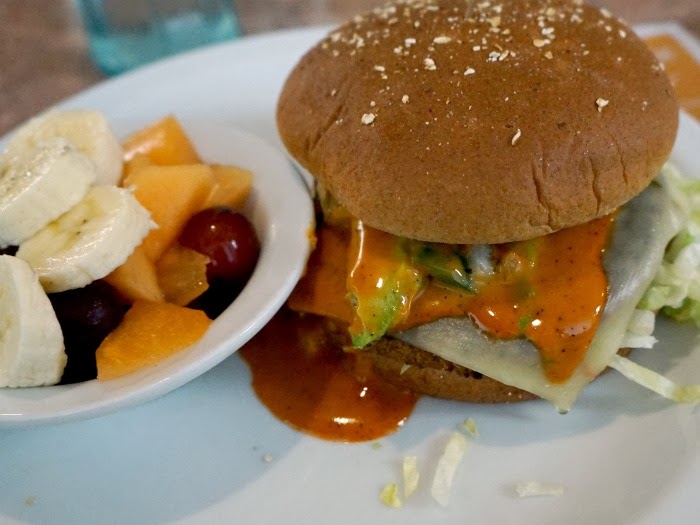 I loved that they really drenched the burger in sauce to make it extra tasty. The bun was super soft and the veggie patty was cooked to perfection. They also weren’t stingy with the side of fruit like some other restaurants are. This particular fruit side had cantaloupe, grapes and bananas. All of which I like.

What puts Denny’s over the top in this section, is their “Build Your Own Burger” option. For $8.69 you can choose your bun, patty, cheese and toppings. Then there are premium toppings that are available to you at $1 per selection. My nephews took advantage of this menu option and ordered a turkey burger on a cheddar bun with pepper jack cheese, pickles, hash browns and grilled mushrooms. It looked pretty good, and I gotta admit, it was the first time seeing hash browns on a burger. 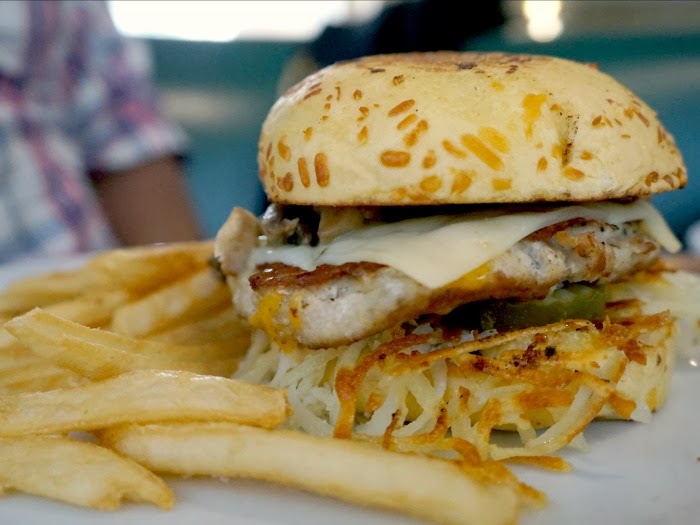 Hubster ordered their new Bourbon Bacon Burger and he really liked the fresh meat patty and the heavy hand they had with the bourbon sauce. They even brought a side of it – just in case. 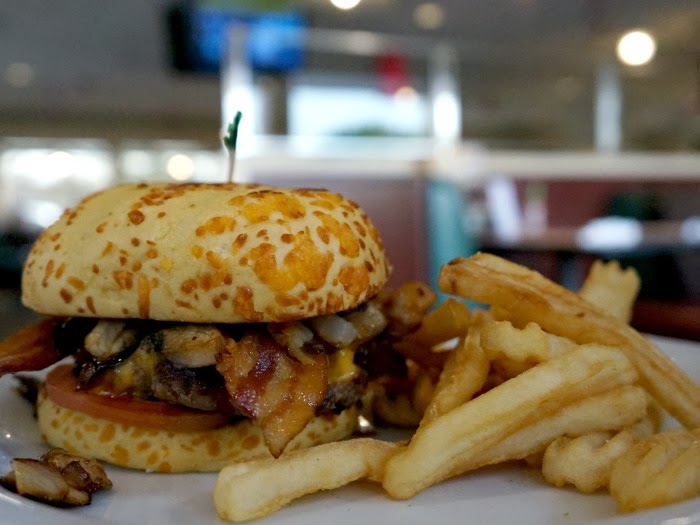 Finally, my other nephew enjoyed a Hickory Grilled Chicken Sandwich that was bigger than the any of the other burgers. A side of seasoned fries rounded out his lunch.

If it’s been a while since you’ve visited Denny’s, I invite you to stop by and grab some lunch to try out their new menu. It really has come a long way and I can bet you that it won’t disappoint. The prices are reasonable (about the same as any other comparable burger place) and the quality of the ingredients will ensure that your meal is as delicious as mine was. Unfortunately, the kids meals remain the same. You may just want to skip ordering from their menu and split a meal with them instead. ¡Buen provecho!