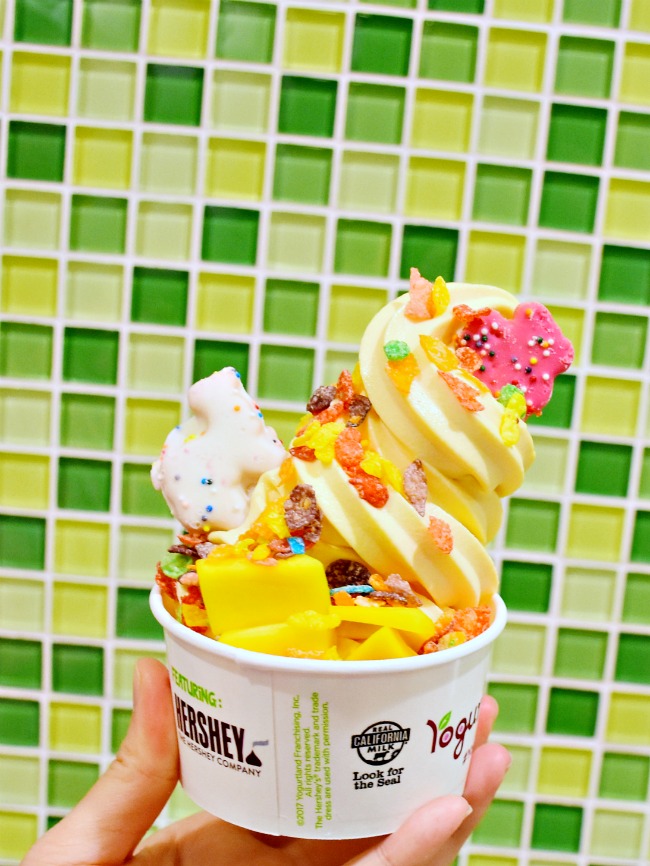 Last week the chiclets and I visited the Yogurtland Headquarters in Irvine, California to check out their new chocolate flavors that will debut on International Frozen Yogurt Day. They had a great time and TONS of frozen yogurt!

We started by trying a few fruity sorbets featured this month, including Dragon Passion Fruit and Pineapple Sorbet, and then moved on to the stars of the show – Hershey’s Chocolate Milkshake and Peanut Butter Cup! Each cup of frozen yogurt was topped by chocolate wafers, Reese’s Pieces and little chocolate kisses.

The kids LOVED the new chocolate flavors, saying over and over again just how much the flavors resembled their chocolate bar counterparts. I’m partial to the fruitier flavors, so I ate my fair share of strawberry sorbet loaded with fruit and a few animal crackers for good measure. Life is about balance, right?

Hershey’s Chocolate Milkshake has a super creamy texture and is made with real Hershey’s Milk Chocolate Fudge & Hershey’s Cocoa. Peanut butter cup is a perfect mix of Hershey’s Cocoa and Reese’s Peanut Butter. Bonus? You get a Hershey’s-themed spoon with your purchase!

While at the Yogurtland Headquarters, we also took advantage of the opportunity to check out their wall featuring some of their 200 flavors that have debuted in the ten years that Yogurtland has been open. These are showcased on a wall in the break room and gives you an idea of how innovative the brand has been in the space.

I look forward to taking the chiclets back to Yogurtland on International Frozen Yogurt Day for their free frozen yogurt, and even more so to their upcoming release of a mystery flavor that will be out in stores in the Summer. I won’t say much, but if you love tart yogurt, you’ll love their new flavor!

I highly recommend that you sign up for Yogurtland’s Real Rewards Program before you head in so you get credit for the frozen yogurt you purchase. Every 36 ounces gets you 3 ounces of FREE frozen yogurt!

Yogurtland will commemorate International Frozen Yogurt Day on Monday, Feb. 6 with free frozen yogurt and toppings from 4pm – 7-pm. Share your pictures using #YogurtlandIFYD and they’ll add them to their FroYo social feed on the Yogurtland website!

Separating Yogurtland from competitors is the company’s team of flavorologists who develop the proprietary recipes for the brand’s more than 250 different and customized flavors that are produced in the company’s own dairy plant in Paramount, Calif. Whether traditional or exotic, each flavor uses real ingredients sourced from their original locations. By controlling the entire frozen yogurt-making process, Yogurtland has raised the standards for flavors and quality to new heights much to the delight of millions of fans.

All of Yogurtland’s flavors meet the National Yogurt Association Criteria for “live and active culture frozen yogurt” and are produced in a kosher-certified facility. Yogurtland features non-fat and low-fat yogurt flavors as well as non-dairy and no sugar added choices while using milk that does not contain antibiotics or added hormones. As for the sorbet, fruit flavors are fortified with Vitamin C for an extra boost.