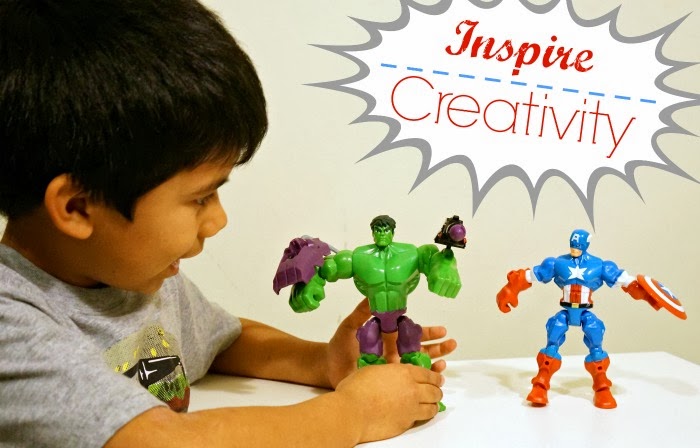 My oldest is six years old. ¡Seis! Wow.. time has flown by. Unfortunately, with his little hermanito sharing his room, it means that I have toys of all age ranges. This might be because the hubster and I tend to buy entire collections of toys that they really like, such as the new Marvel Super Hero Mashers. However, I have a great reason for buying the Marvel Super Hero Mashers line – they’re going to save me money in the long run AND it helps to inspire creativity!

The new Hasbro Marvel Super Hero Mashers feature my kids’ favorite Marvel super heroes and villains – with completely interchangeable parts and accessories! Kids can create their ultimate super hero by mashing up the different strengths from these action figures. This year alone, there are over 20 unique Marvel Super Hero Mashers scheduled to be in stores, so they’ll never get tired of mashing them up.

We started off with two figures so we could get an idea of how much they liked them. Turns out – they’re huge fans. I mean, never mind the fact that they’re super heroes (awesome!), BUT, they can let their imagination run wild as they create new super heroes. 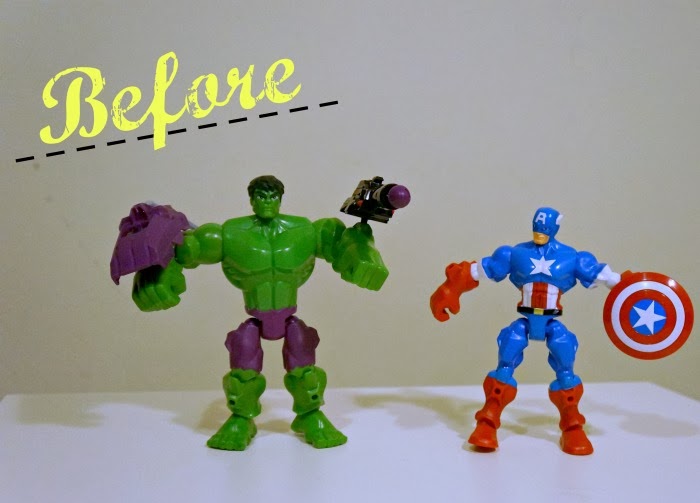 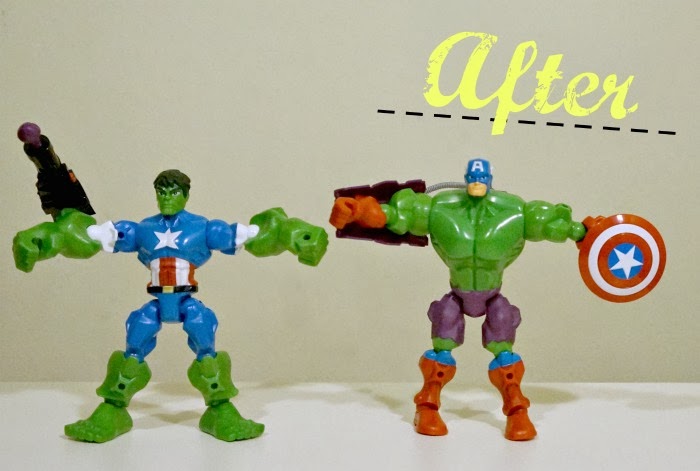 My oldest understands the concept of combining super powers, the little one (2 and a half years old), just likes being able to tear them apart. Está bien – as long as they’re playing together, it’s okay if they’re on different wave lengths.

The boys are currently playing with Marvel Super Hero Mashers Hulk and Captain America. We’re thinking that they’ll make great reward prizes for my oldest behaving in school so we have a couple more stocked away. Hey, nothing is free around here!

If you’re thinking of heading out and grabbing some for your kids too, take a look at this handy list to give you an idea of what the kids can do with their different Marvel Super Hero Mashers. I would suggest starting out with a regular action figure and a battle upgrade figure. This way, you can have at least one of them with a Battle Gear piece.

Thirteen figures will be available in this assortment in 2014, featuring favorite Marvel characters like Captain America, Spider-Man and Green Goblin. Each figure is sold separately and comes with an accessory.

Seven figures will be available in this assortment in 2014, featuring favorite Marvel characters like Hulk, Thor and Venom. Additional Mash up arms included in Wave 2 figures. Each figure is sold separately and comes with multiple Battle Gear pieces, including a launch missile.

Four figures will be available in this assortment in 2014, featuring favorite Marvel characters like Iron Man, Wolverine and Spider-Man. Each figure is sold separately and comes with Battle Gear pieces, including a launch missile and an electronic light-up piece, plus additional Mash up pieces.

My six year old, Logan, tends to watch a lot of YouTube videos featuring kids playing with their toys and he thought it would be neat to do the same. So we pulled together this short video to give you an idea of what kids can do with Marvel Super Hero Mashers.


Visit Hasbro.com/heromashers/en_US for more information on these new Marvel Super Hero Mashers! While you’re there, have your kids virtually create their own Mashup! It’s free and totally fun.
This is part of a product review campaign with Latina Mom Bloggers and Hasbro; complimentary products were provided. However, all opinions expressed are my own.