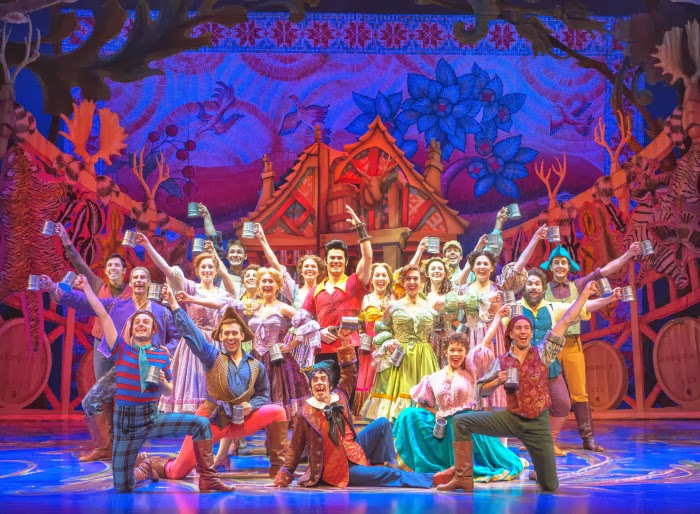 I’m often reminded of my great fortune to live in Southern California, especially when productions like Disney’s Beauty and the Beast come to Orange County. On opening night, I sat with much anticipation in the fully-packed Segerstrom Center for the Arts wearing my favorite red dress and expecting to see a rendition of one of my favorite Disney films.

The beginning of the show started like the movie – the enchantress giving the Beast a rose, Belle dancing and singing in the village, and eventually landing in the castle. The first hour and a half was fantastic. It featured some amazing songs including a rendition of “Gaston” with some stupendous choreography that included the use of metal beer mugs. The song was longer than the one in the movie, but much more entertaining.

The first half of the show also featured “Be Our Guest” and if you think the song is fun on the big screen – you should see it live! There are plates and knives dancing, salt and pepper shakers having fun and the enchanted characters with Belle moving to the beat we all know all too well. The song ends with a bang and lots of colorful streamers shooting out into the audience.

Seeing Belle and Beast’s relationship grow was beautiful. We see Beast’s mannerism transform to a more human-like behavior while the enchanted characters become more like the material objects that they are to become should they run out of time when the last rose petal falls.

Although the production does follow the trajectory of Disney’s Beauty and the Beast, the show gives us a bit more insight into some details that are not covered in the film. For example, how did Belle and the Beast decide to dress up for their dinner? You’ll see this in the first half.

Intermission runs for twenty minutes afterwards and we return to see Belle looking for her father.

The ending remains the same with Gaston meeting his final destiny, but in a different manner. Though the movie is perfect for kids of all ages, there are two scenes that might be a little too strong for the younger audience. The second scene being this last one with Gaston and Beast fighting it out. Not to worry though, there’s a happy ending.

Disney’s Beauty and the Beast will be at Segerstrom Center for the Arts through January 19th. It’s the perfect choice for a date night, with your kids or your partner. With tickets starting at just $29, it’s an affordable night out!

Disney’s Beauty and the Beast

The 2 p.m. performance on Saturday, January 18 will include audio description, open captioning and sign-language interpretation.

Pre-show activities will take place one hour prior to each performance and include:

A Library complete with children’s books and coloring sheets.

The return of the popular Photo Opportunity where “our guests” can pose in front of two charming backdrops. Guests are encouraged to post photos on their social media sites and use hashtag #BeOurGuestOC.

Themed Cupcakes and Cocktails created by Patina Restaurant Group will be available for purchase.