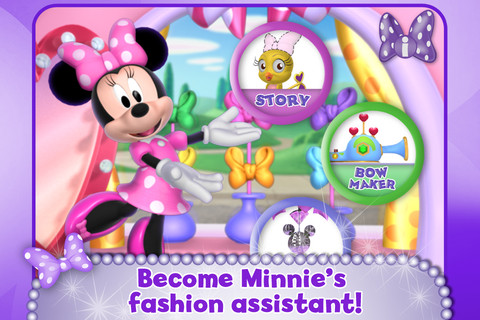 I have two boys at home and while my oldest was into girly things when he was younger, that is no longer the case. This basic principal applies to everything now, including games. We used to have girly apps on the iPad, but now all we have are Marvel, Angry Birds, zombie games, etc. So I share this app to live through you – the ones that have girls in your home.

Choose the material, color, shape, pattern and type of bow, then watch your bow take shape in Minnie’s Bow-Maker!

Create and customize bows for Minnie and her friends, and place them on your own photo!

FEATURES
· Three all-new stories inspired by the Minnie’s Bow-Toons series!
· Play with lots of possible Bow-Maker customizations!
· Personalize your own photo and share it with your friends!
· Enjoy a 3D Bow-Show featuring your creations!
· Features music and voices from Minnie’s Bow-Toons!

This is not a sponsored post. All thoughts and opinions remain my own.