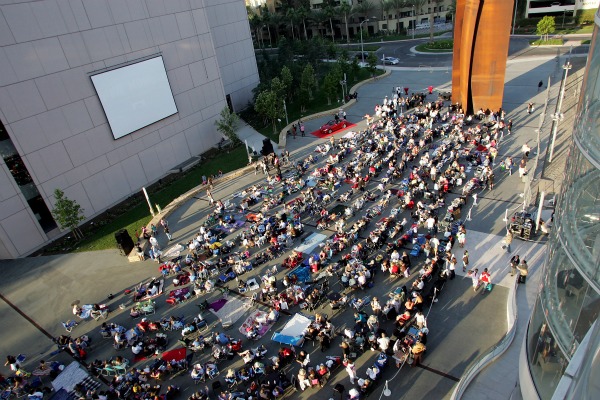 There are lots of free and discounted movie events around Orange County and LA – especially around the Summer. However, there are few that make it a “thing” like Segerstrom Center does. 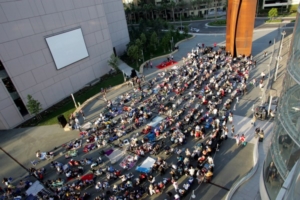 So what makes FREE movie Monday at Segerstrom Center for the Arts so cool? Well it’s the fact that they make it a whole evening event that is great for couples AND families!

First, they have contests before the movie (these pre-movie activities start at approximately 7:30). Prizes such as tickets to shows, DVDs and other fun-filled items are awarded to contest winners. Then, they also have special themed-menu items (provided by Patina Catering) for each Movie Monday! This series was carefully thought out to make the most out of what would have been a boring Monday at home.

A few more details:
Films are projected on the side of Segerstrom Hall. You’re encourage to bring beach chairs or other easily portable seating items. Set-up begins at 5:30 p.m., with the movie starting at dusk (approximately 8 p.m.). And if you’re not up for the special themed-menu items, you can always bring your own snacks and picnic suppers. Barbecues and similar food preparation are not permitted.

If you’re ready for another great summer of Movie Mondays, say “I do!” This sweet romantic comedy stars Adam Sandler and Drew Barrymore as a seemingly perfectly matched pair, if only they weren’t engaged to other people. Will they discover each other and find true love? Only with the help of a soundtrack of classic ‘80s tunes!
Rated PG-13, 1998, 1 hour and 35 minutes

Acclaimed director Wim Wenders’ documentary follows American jazz guitarist Ry Cooder as he travels to Cuba to unite the legendary musicians of pre-revolutionary Havana. The result was not only a triumphant performance of extraordinary music (hailed by Rolling Stone Magazine as one of the 300 greatest albums of all time), but also helped immortalize the artists who were all but forgotten in their own country. On September 17, the Center opens its 2013 – 2014 Season with Orquestra Buena Vista Social Club in the Renée and Henry Segerstrom Concert Hall.
Rated G, 1999, 1 hour and 45 minutes

Celebrating the 15th year of its release, Mulan is based on a Chinese legend about the only daughter of an aged warrior. To protect him and save their family’s honor, our high-spirited heroine disguises herself as a man and takes her father’s place in the army. With characters voiced by Eddie Murphy, Ming-Na Wen and Harvey Fierstein, and featuring songs by Broadway stars Donny Osmond and Lea Salonga, Mulan is the uplifting tale of the strength and bravery that lies in all of us.

July 29 – The Phantom of the Opera

The longest-running Broadway show in history was given a Hollywood make-over with this 2004 adaptation of Andrew Lloyd Webber’s mega-musical. “The Music of the Night” will surround the Arts Plaza as we screen the winner of last year’s Audience Favorite Online Poll!
Rated PG-13, 2004, 2 hours and 23 minutes

Starring Madonna, Antonio Banderas and Jonathan Pryce, this 1996 film by Alan Parker depicts the infamous real-life story of Argentina’s Eva Duarte de Perón, who rose from poverty to become one of the most famous and powerful women in history. Movie Mondays audiences will have a chance to experience the classic Tim Rice musical in 2D before the new live production opens the Center’s Broadway Series in December.
Rated PG, 1996, 2 hours and 15 minutes