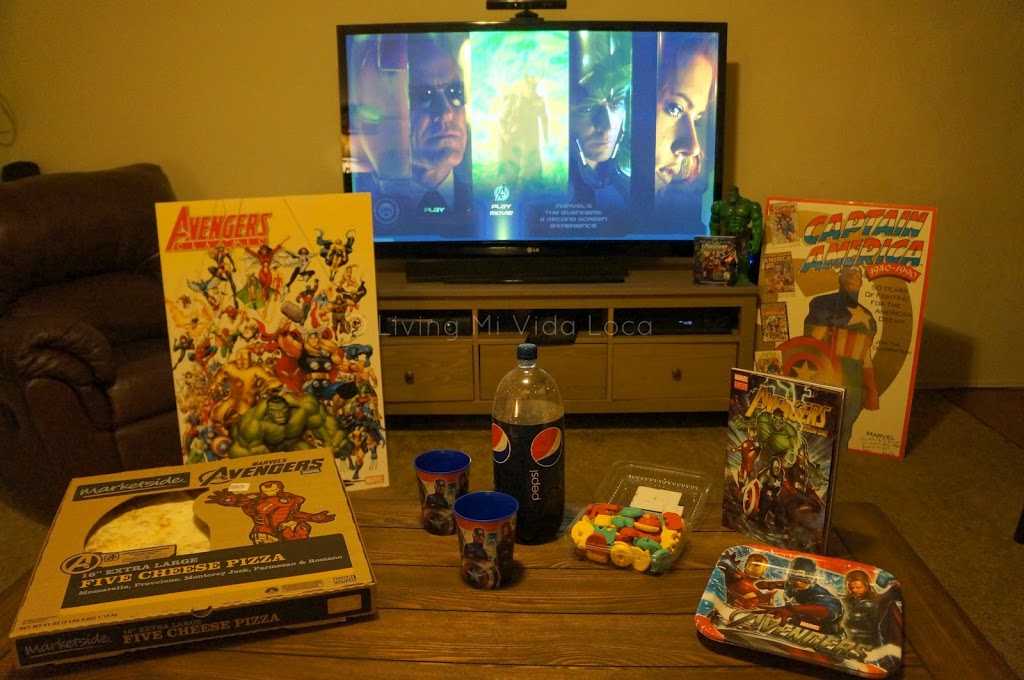 We have been waiting with much anticipation for The Avengers Blu-ray/DVD release since the day it was released in theaters. I didn’t get a chance to see it on the big screen for random reasons, one of them being a young baby. When Disney/Marvel shared The Avengers release date, I knew that we would be one of the first families to head out and buy it, along with some food, for our movie night. Such was the case on Tuesday morning. I couldn’t wait to wake up the kids and head out to purchase the necessities for our Avengers viewing party.

I had to make a few preparations before heading out. First up was deciding where to get the movie. When big movies, such as The Avengers, are released, most stores have a freebie, limited edition, exclusive goodie that is packaged with the film and made to entice you to head to their store for the purchase. We did our research the week before and decided on purchasing our copy of The Avengers at Walmart.

We chose Walmart because only Walmart has the exclusive Blu-Ray/DVD/novel combo pack! The hubster got into graphic novels a few years ago and since then, whenever he brings one home, I end up reading it too. My four year old is also a huge fan of comic books and if I can get him to sit still for an hour and flip through a book, then I’ll do what I can to get a book interesting enough for him to sit through. 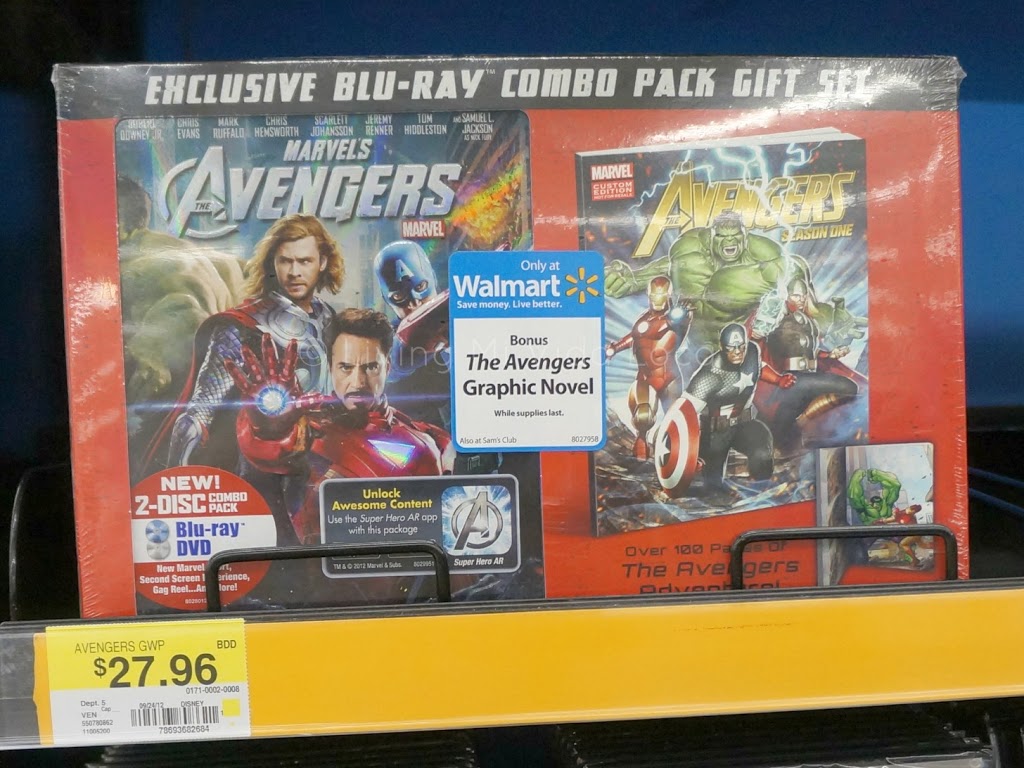 Walmart also had an important factor in our upcoming movie night – food! More specifically, Walmart offers Avengers-themed MarketSide pizza that would later play a big role in our movie night at home because they each feature a different Avenger on the box. 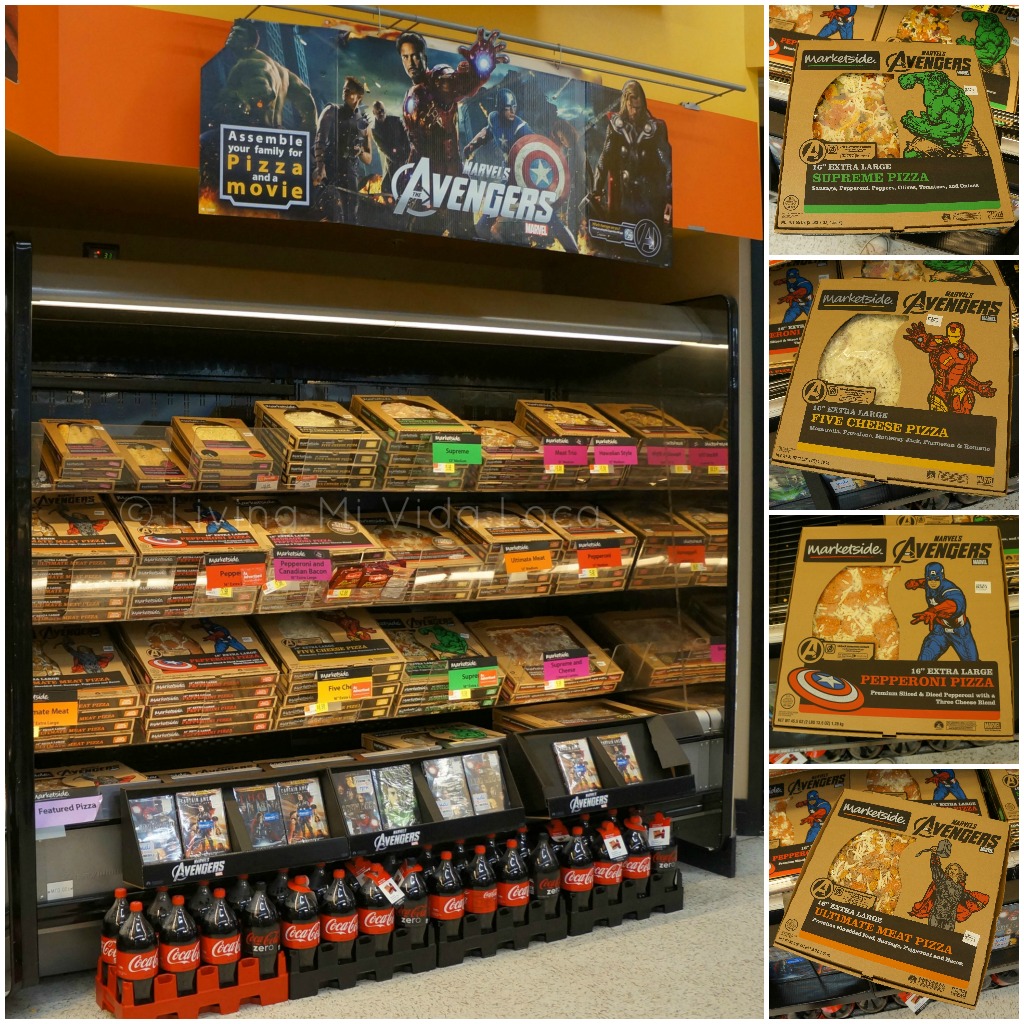 And finally, as if a graphic novel freebie and Avengers-themed pizza wasn’t enough, Walmart is also the only retailer to partner with the new (and FREE!) Avengers Augmented Reality App.

This app allows you to scan different “trigger points” at Walmart which then leads to a “Which Avenger Are You?” quiz and other amazing things to happen on the iPad including taking pictures with The Avengers and the ability to activate 3D-type graphics above The Avengers DVD/Blu-ray or Avengers MarketSide Pizza boxes (sold only at Walmart). It turns a simple shopping trip into a scavenger hunt to find all the trigger points. So when the kids were finally ready, I made sure to check that the app was on the iPad, ensured that we didn’t need internet connection to use it and off we went. 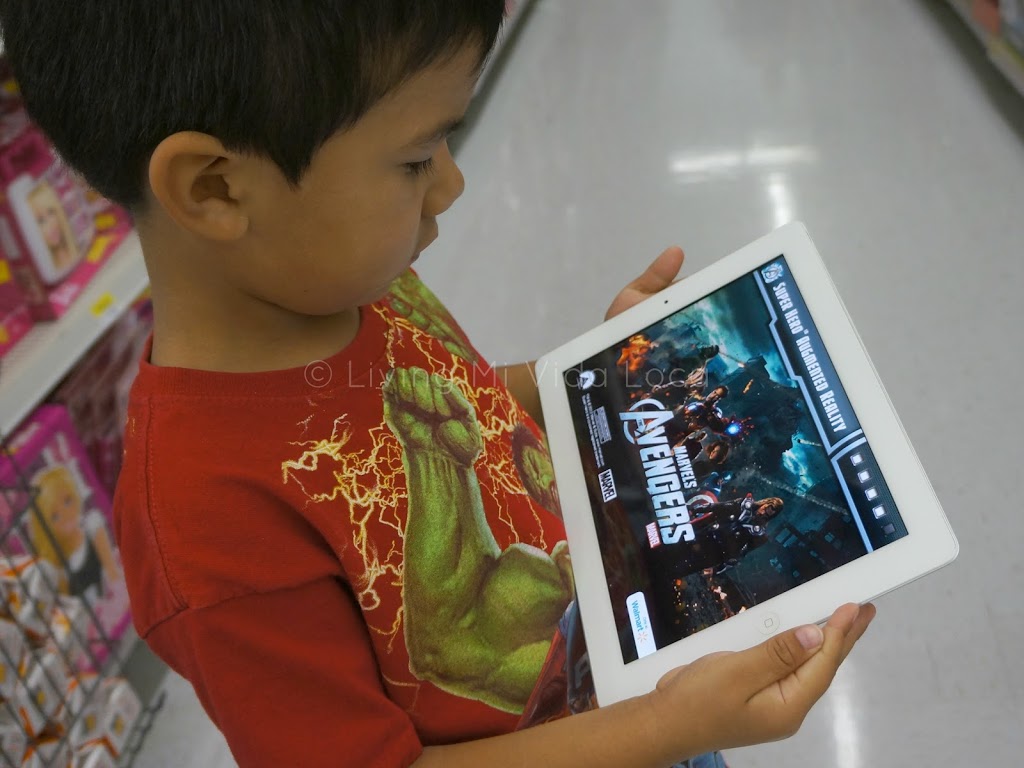 My kid was decked out in his Avengers shirt and excited for our purchase. I wanted to head straight to the entertainment section, but desperately had to stop by the McDonald’s located inside our Walmart to get a coffee. I had been up since 5 a.m. and still hadn’t had my first cup of coffee. I love McDonald’s coffee. It’s so delicious, strong and freshly brewed. It’s also a deal because you get free refills! 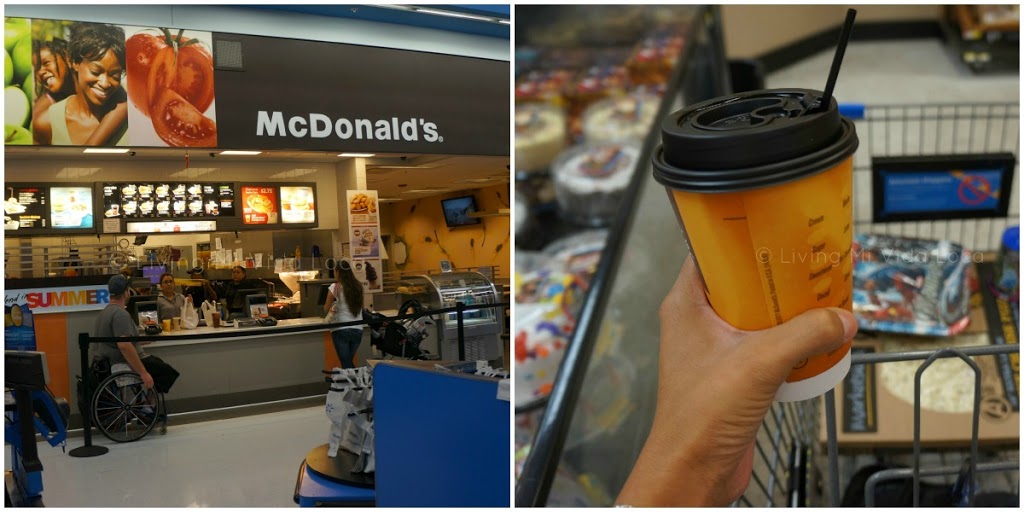 I grabbed my coffee and headed to the electronics section, only to be sucked into the toy section. Toy makers released some seriously cool toys for the release of The Avengers. My favorite (and yes, I almost bought it) is the S.H.I.E.L.D. Helicarrier. Measuring over three feet long, this toy is humongous and I can just imagine all the fun stuff it must do.

So the kids and I are walking around the display and I notice that it has an Avengers Augmented Reality App trigger point located in the corner. I pull out my iPad, hand it over to my kid and he proceeds to scan the large cardboard display. 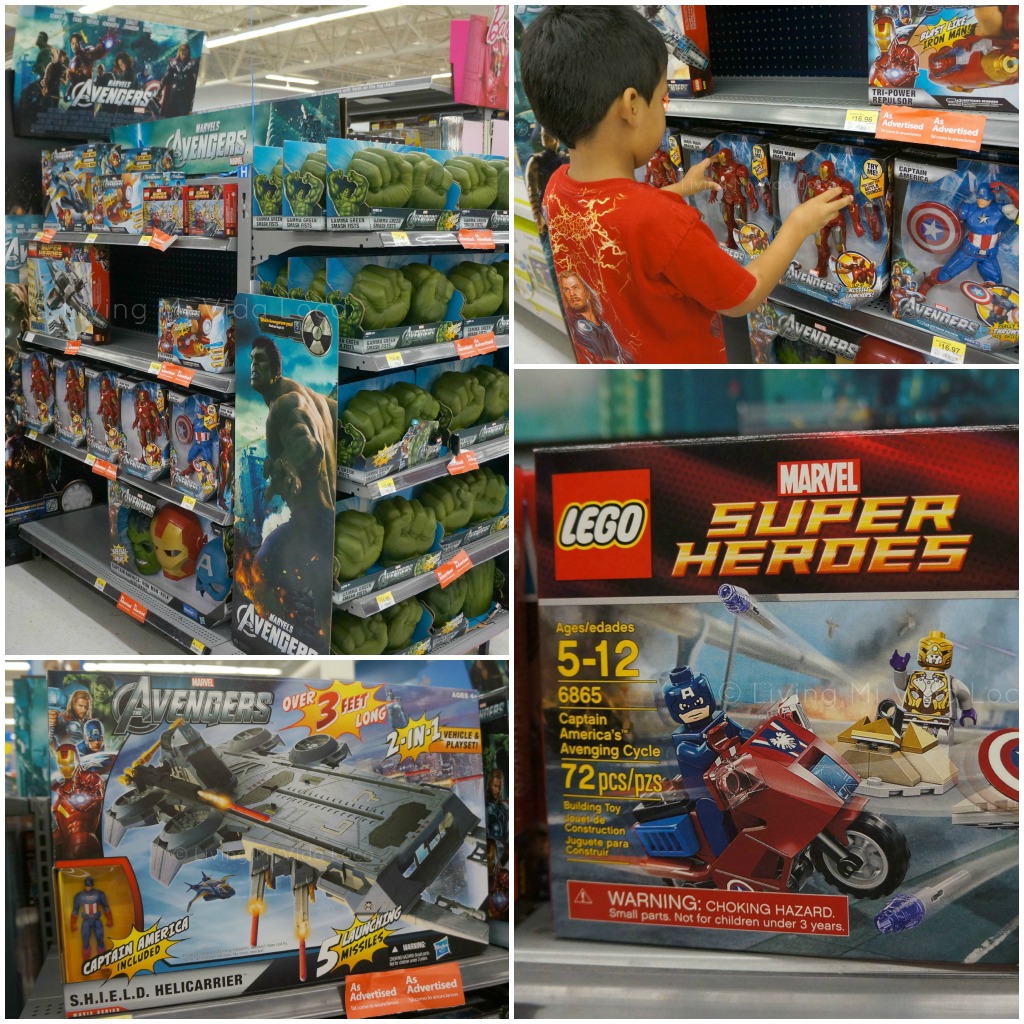 I read him the questions and we answered them together. We made it our mission to finish the quiz before we left the store. We needed a minimum of three trigger points scanned for our 9 questions to be revealed. At the end of the nine questions, the app would compile the answers and tell us which super hero we most resonated with. I love all the Avengers in their own way so I knew that we would be happy with whichever super hero we got. Still… I was secretly hoping for Thor or Ironman.

We passed by so much Avengers merchandise that you’ll have to head over to the #MarvelAvengersWMT Google+ album to get a good luck at what we found. Honestly, I wanted to purchase every single Avengers items at Walmart, especially the shoes. Unfortunately, they didn’t have my kid’s size.

We pass the toys, go around the bend and walk right into the costumes section where once again, the Avengers-fever is in full effect. We searched for the  trigger point display but didn’t see one. So we head over to the party supplies, pick up some cups and plates and then we end up in front of The Avengers movie display in the electronics section… finally!

My kid automatically went for the Blu-ray copy, but he didn’t notice that the top row of movies had the novel in the pack. I showed it to him and he was super-excited to get the book. I warned him that his Daddy would want him to be extra careful with it because I suspected that his dad wanted the graphic novel for himself, and not to share.

Once we added the movie to our shopping cart we went to the refrigerated section for our pizza (another trigger point). We activated our third trigger point and accomplished our mission, thereby revealing which super hero we were most like. 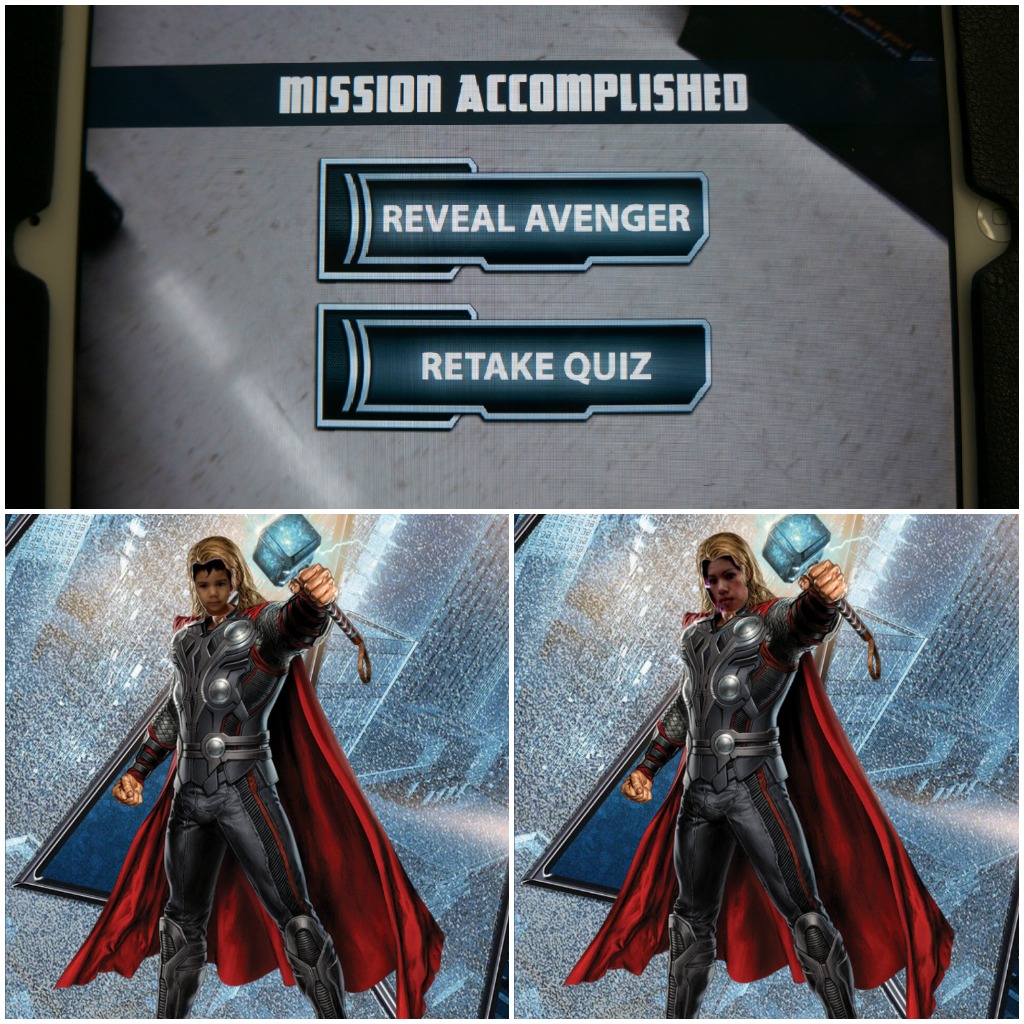 By the way, there are four different types of MarketPlace/Avengers pizzas and Walmart offers only one vegetarian option – the five cheese pizza featuring Ironman on the cover. So we grabbed it along with some French bread and sugar cookies (Avengers-colored) and checked out.

We had a full day ahead of us so the extra-large pizza stayed in a couple of different places as we went on a playdate at my friend’s house and a DJ lesson in a city, far, far away from us. By 7:30 p.m. – almost 12 hours since leaving our home in the morning – we were ready to sit down as a family (minus the baby) and watch the movie in peace. I loved the movie more than any other super hero movie that I have seen (and I’ve seen A LOT!) and I agree with Chuck Walton’s quote on the front of the box, “The Best Superhero Movie Of All Time”.

We made it a movie night at home with The Avengers and some delicious MarketSide pizza for under $45. It was so much fun to look forward to it all day and we all had a great time watching The Avengers as a family. We stayed put for the entire movie, including the credits and two scenes that come at the end during/after the credits. I’m looking forward to doing it again soon. Possibly this weekend? Maybe this time Walmart will have more trigger points and the Hubster can try out the app for himself. 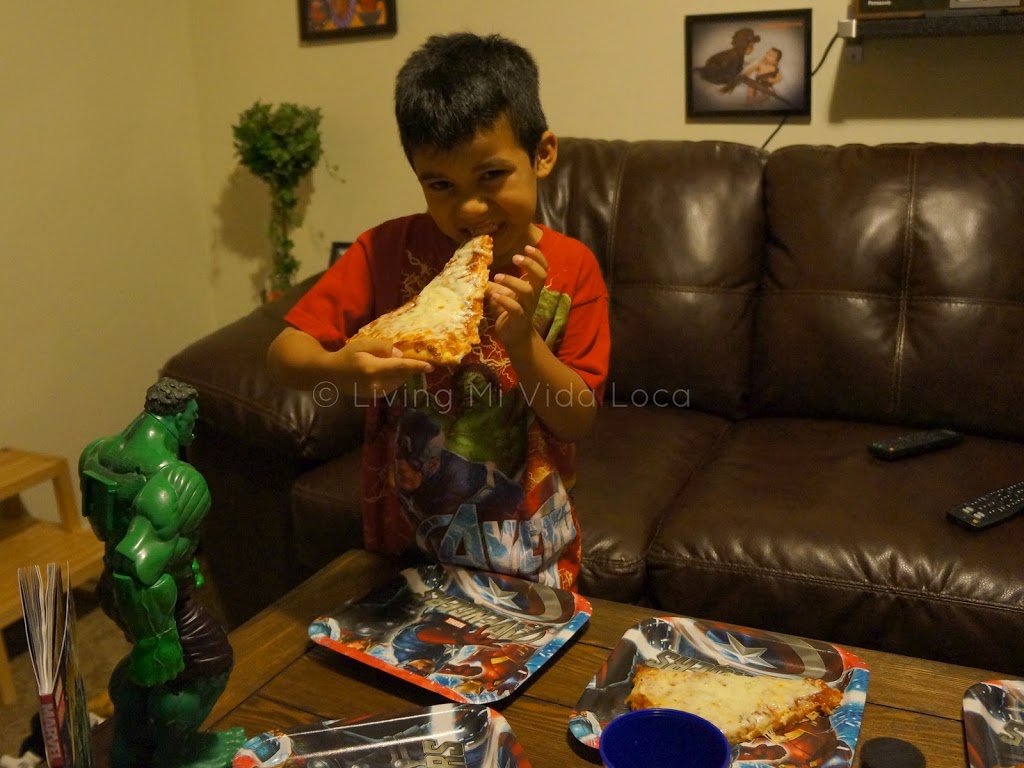 [disclaim]I am a member of the Collective Bias™ Social Fabric® Community. This content has been compensated as part of a social shopper insights study for Collective Bias™ and Marvel. All thoughts and opinions remain my own. #MarvelAvengersWMT #CBias #SocialFabric[/disclaim]

Tips for Dads
Gathering tips for Back to School