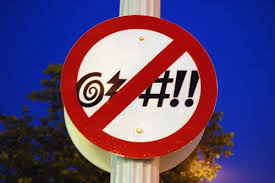 I’ve never been big on swearing. Sure… I went through that period in high school where you do it just because everyone else seems to be doing it or because I thought it felt “grown up” to use those bad words, but as an adult, I’ve never been big on swearing. Before my kid came along, I saw nothing wrong with using hell, damn, or any other word with a$$ in it. Once my kid turned about two, I took inventory of my curse words and decided to stop using them once and for all. Hell became heck, damn became dang, a$$hole became donkey and all the other words with a$$ in them just disappeared (for the most part).

Now that my kid is three, I’m glad I stopped using all those “bad” words, otherwise, my kid would be saying this to me: “What the hell did you say Mommy?” Apparently, I use dang a lot more than I should because my kid uses it in his conversations every single day. At this point, I’m between being amused and getting him to stop saying it. I don’t mind him using it, it’s more about what other mom’s will think and whether they’ll let their kids play with mine because he uses that one word. Think I’m being too paranoid about this?