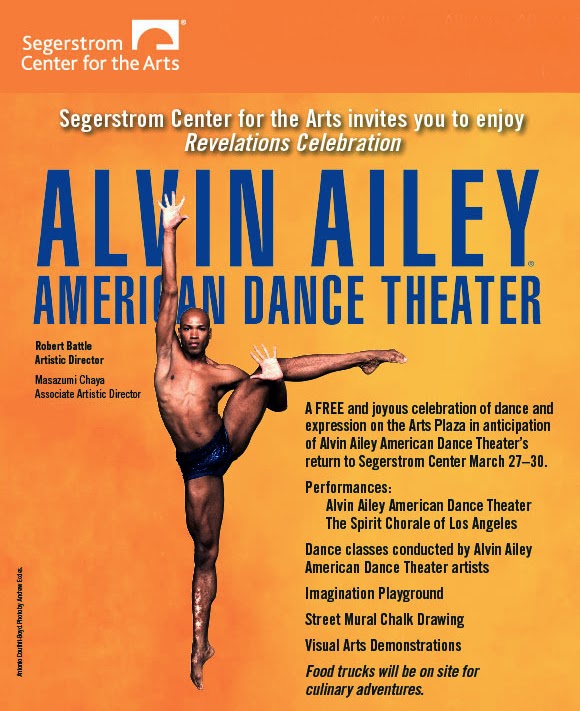 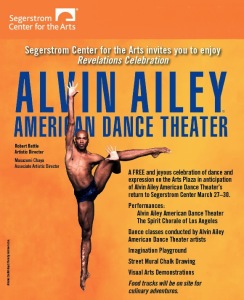 To welcome the return of the Alvin Ailey American Dance Theater, the Center and the Company will host Revelations Celebration, a FREE kick-off event on the Arts Plaza beginning at noon on Saturday, March 22. Visitors of all ages will have the opportunity to participate and engage directly with Company performers and teaching artists and in other activities as well. Among the many activities planned, acclaimed Ailey teaching artist Nasha Thomas-Schmitt, master teacher and former Ailey principal dancer, will teach the distinctive movements of three of the most well-known pieces from the Company’s cornerstone work, Revelations, including “Rocka My Soul,” “Wade in the Water” and “I’ve ‘Been Buked.” Fans and novices alike are welcome!

Segerstrom Hall
D-Man in the Waters (Part I), Revelations
Wednesday, March 26 at 7:30 p.m.

Members of the Alvin Ailey American Dance Theater will conduct preview lectures one hour prior to each performance. The preview talk on Friday, March 28 will be sign-language interpreted.

Visit SCFTA.org for more information, to purchase tickets and stay updated on other upcoming shows.